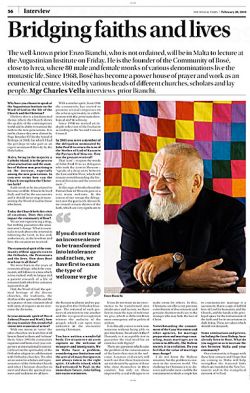 Sunday Times of Malta, 28 febbraio 2010
Sunday Times of Malta
28 February 2010
Faith needs to be incarnated to become credible. It has to be lived daily and fed by the sacraments and it should never stop in transmitting the Word of God to those who listen.

Q. I have visited your community in Bose, which I find unique, inspiring and true to the monastic tradition. However, I am very glad you are coming to the Island of St. Paul. Is it your first visit?

A. Yes. It is a visit that I have longed to accomplish, but I never had the opportunity.

Q. Why have you chosen to speak at the Augustinian Institute on the Word of God in the life of Church and of the Christian?

A. I believe this is a fundamental theme, where the Church shows the quality of the contemporary world and its ability to transmit the faith to the new generations. It is not by chance that the theme was chosen by Pope Benedict XVI for the Synod of Bishops in 2008, to which I had the privilege to take part as an expert nominated directly by the Holy Father.

Q. Malta, being in the majority a Catholic Island is in the process of secularization and the number of Maltese non-practicing is on the increase, especially among the new generations. How can in concrete terms the Church strengthen the Christian faith?

A. Faith needs to be incarnated to become credible. It has to be lived daily and fed by the sacraments and it should never stop in transmitting the Word of God to those who listen.

Q. We are interested in the Community of Bose which in Malta is not so known, may you tell me how you started the foundation?

A. The Community was born on the 8th December of 1965, the day of the closing of the second Vatican Council. I choose that day to start living all alone, in a rented house near the derelict “borgo” of Bose. The first brothers joined me three years later, among them a woman and an evangelical pastor. From then on, every morning, midday and evening we celebrated the singing of the liturgical hours, we worked, we were open to hospitality, and we studied the scriptures and the monastic tradition. We started to live the fatigue of monastic daily life, as a fruitful adventure of the community. Today the community consists of 80 persons, men and women, some of whom are evangelical; five are priests and a pastor. Without ever planning it but as a great gift of the spirit, from the very beginning Christians of different denominations have formed part of Bose. From this happening we have sought to make a commitment towards the unity of all Christians having always faith in the words of Christ: “That all may be one.”

Q. Today the Church feels the crisis of vocations does this crisis affect the community of Bose?

A. For now we do not see a drop, but nothing guarantees that it will always be so. What is the essential is to seek always the renewal in following the Lord, to live with authenticity, in the freedom and love, the vocation we received.

Q. The ecumenical spirit of the community of Bose appeals even to the Orthodox, the Protestants and the Jews. How does Bose outreach to all these?

A. We were born in the years of ecumenical hope, which the community still follows in a time which is less exalted, with its fatigue and a patient research of a life of common faith which for centuries separated us all. Only the Word of God, the spiritual heritage of the diverse churches, the traditions, the rhythm of the spiritual life and the acceptance of one common ideal with unity of respect so as to overcome the divisions. Faithfulness and obedience, audacity and prophecy animate our constant journey towards conversion which is a return to the one Lord and His will that “all may be one.”

Q. In your monastic spirit of “Ora et Labora” (Prayer and Work), how do you translate all this wonderful vision into ecumenical action?

A. With our intent to “serve” the other churches, we learn first of all how to “listen” to them and “to know” them. As from 1993 the community organizes and hosts every year congression an international ecumenical level on the spirituality of the Orthodoxin collaboration with Orthodox churches. We offer an occasion for scholars and representatives of the Orthodox Church and other Christian churches to meet so as to share the spiritual treasures and traditions we all have. With a similar spirit, as from 1996 the Community has started to promote several congresses on the Reform spirituality in a collaboration with the protestant theological and Strasburg. As from 1994 we have commenced an in depth refection of the Eucharist according to the Second Vatican Council. Also hold in Bose the international ecumenical meetings on the liturgy .

Q. You have been in 2003 a member of the delegation nominated by John Paul II to return the icon of the Mother of God of Kazan to the Patriarch of Moscow. How was the gesture received?

A. “That icon” – to quote the words of John Paul II to us delegates who took the icon to Moscow – “speaks of a deep unity between the East and the West, which will remain notwithstanding the historical divisions and the errors of men…” In this sign of brotherhood the Patriarchate of Moscow gave us a very warm welcome. In the course of our voyage the delegation met the patriarch Alessio II, we visited certain shrine of the faith, which are very significant to the Russian tradition and we participated in the Orthodox liturgies. The renewal of such gestures of attention to one another and the reciprocal recognition witness the audacity of the gospel, which can open ways unknown in the encounter among Christians.

Q. You have written a wonderful book: Ero Straniero e mi Avete Ospitatoon the welcome of strangers and emigrants. We in Malta have a problem, considering the limitations of our Island. The arrival of many foreigners is not always taken in the right spirit. A Catholic Island, which had welcomed St. Paul, in the immediate future, may create racism.

A. If you do not want an inconvenience to be transformed into intolerance and racism, we have first to exam the type of accoglienza (welcome) we give, which is different from mere emergency aid or political asylum. Is it ethically correct to welcome someone without being able to give him home, bread and clothes? Humanly is it acceptable not to guarantee the vital need for an existence with dignity? These are questions which raise the problem of the consciousness of the limits that exist in the accoglienza. A mature civil society, will watch out that these limitations are not dictated by egoism of those who close themselves in their comfort, but only on those imposed by a real willingness to fare spazio (make room) for the others. In this the Christians can offer a very precious contribution of discernment and genuine disinterested care to the stranger who may hide the face of Christ.

Q. Notwithstanding the commitment of the Cana Movement and other agencies, for marriage preparation and marriage counseling, many of our marriage are in crisis or in difficulty. The Maltese society is in evolution, do you feel that the value of marriage may change?

A. I do not know the Maltese situation, but the problem is common in the Western World. The Challenge for Christians is to re-discover and render more credible the commitment in which a couple has to communicate: marriage is a sacrament, that is a sign of faithful love of God for humanity and the Church, and the family is the privileged space for the transmission of the faith and for its incarnation in daily living. These are values which should not diminish.

Q. Some seminarians and priests, including the Bishop of Gozo, have already been to Bose. What do you suggest so as to increase the ties between Malta and your community?

A. Our community is happy with these first contacts and I hope that my coming to Malta will help to strengthen the fraternal links which are founded in the New Testament and in the evangelical mission of St. Paul.