Meeting of the Saint Ireneus group in Thessalonica 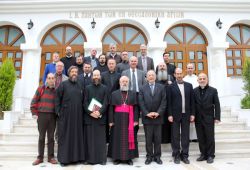 Saint Ireneus group in Thessalonica for the official dialogue betwenn the Catholic church and the Orthodox churches
23 November 2013
The tenth annual meeting of the Catholic-Orthodox group of theological studies St Ireneus discussed the relationship between history and theology, between conciliarity and primacy in modern theological thought

The tenth annual meeting of the Catholic-Orthodox group of theological studies St Ireneus was held at the Ecclesiastical Academy of Thessalonica on 13–17 November 2013. The participants discussed the relationship between history and theology, between conciliarity and primacy in modern theological thought, in particular in Yves Congar and Olivier Clement, and Orthodox reactions to Vatican II in general and to the constitution Lumen Gentium in particular. Br Adalberto, as member of the Group, participated in its work.

During the meeting a new Orthodox co-president was elected: Job (Getcha), soon to be ordained bishop of the Russian Orthodox churches in western Europe within the ecumenical patriarchate. The former co-president, the metropolitan John (Yazigi), was elected patriarch of Antioch in February 2013.

The Group’s work was held in a climate of listening to one another and in prayer in the Academy church. Metropolitan Elpidophoros of Prusa  transmitted the blessing of patriarch Bartholomeos, and metropolitan Anthimos of Thessalonica and archimandrite Stephanos Tolios, its chancellor, transmitted their greetings. The members of the Group are grateful especially to the rector of the Academy and to father Nikolaos Loudovikos for their warm hospitality and financial assistance for the session.

The official communiqué at the end of the meeting states that “truth can be approached only by listening to the Gospel and to other Christian traditions. Thus, two ecclesiological tendencies may be noted — a conciliar in the East and a primatial in the West, which are not necessarily mutually exclusive, but can coexist in corrective tension that leaves room for legitimate diversity”. As Niels Bohr, quoted by Congar, said: “The opposite of a false proposition is a true proposition. But the opposite of a profound truth is another profound truth.”

The St Ireneus Group was founded in 2004 on the initiative of the bishop of Magdeburg and of the Johann Adam Möhler Institute of Paderborn to aid through its theological research the official dialogue between the Catholic and the Orthodox Churches.

The Group is made up of twenty-six theologians from Europe and the United States, thirteen Catholic and thirteen Orthodox. The members of the Group have not official mandate from their Churches, but intend to study together, each faithful to his own tradition and in a spirit of fraternal discussion, the theological points that constitute an obstacle to full communion between the Orthodox and the Catholic Churches.

In past years the St Ireneus Group met in Greece (Athens), Belgium (Chevetogne), Serbia (Belgrade), Austria (Vienna), Ukraine (Kiev), Germany (Magdeburg), Russia (St Petersburg), and in 2012 in Italy at the monastery of Bose.