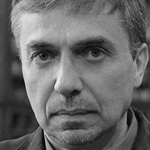 Konstantin Sigov (Kiev 1962) teaches history of theological and philosophical ideas at the Mohyla Academy State University in Kiev and directs the Center of European Humanities Research. In 1992 he founded the cultural and publishing association (Spirit and Letter (Dukh i Litera), of which he is the director. Its publishing projects have been the basis for a network of contacts with the most important European schools of thought and which brought to Kiev scholars and philosophers uh as Paul Ricœur, Reinhard Kozellek, Arvo Pärt, Georges Nivat, and others. Konstantin Sigov has published translations of the works of Patriarch Bartholomeos I, cardinal Walter Kasper, archbishop Rowan Williams, Enzo Bianchi, Michel van Parys, and of fundamental documents of the ecumenical dialogue between Catholics and Orthodox. Since 2000 he has organized every year the international ecumenical forum Dormition Readings (Uspenskie Čtenija) and publishes its Acts. He is the author of over fifty studies in philosophy, theology, and history of culture, published also in Italy, France, Germany, United States, England, and Sweden. He has held lectures at the Sorbonne, at the Universities of Oxford, Stanford, Rome, geneva, Louvain, and others. The French Ministry of Education has named him Chevalier dans l’Ordre des Palmes Academiques.

The life of witnesses and the way of martyrs are the criteria for a new critical look at the martyrology of the twentieth century. The self-awareness of an entire host of anonymous witnesses to truth is expressed lucidly in the words of the last rector of the Theological Academy of Kiev, the priest Aleksandr Glagolev, that he pronounced during his interrogations in 1937: “Only then will the sufferings of Christians resemble Christ’s sufferings and will be salvific for those who suffer when these in their sufferings will be able to preserve the true faith and a firm love of the heavenly Father… and will be able to maintain fraternal love for their neighbors, not excluding their enemies”.
Through a reconstruction of the life of the new martyr Aleksandr Glagolev and of his son, the holy righteous father Aleksej Glagolev (†1972), and of the community gathered around them, the paper attempts to discover how the martyrs themselves saw their path as a way of love and communion. “The most important thing in martyrdom is not blood, but unchanged and unchanging love” (metropolitan Anthony Bloom). Without love, there is no witness to the truth. The criterion of truth is the “law of love”.