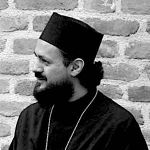 Bishop Maxim graduated from the Theological Faculty of the Serbian Orthodox Church in 1993. He continued his education at the University of Athens where he received a Masters of Theology in 1996. Three years later, in 1999 he defended his doctorate at the University of Athens in the field of dogmatics and patristics. He worked for one year on his post‐doctorate degree in Paris and then from 2003 to 2004 at Sorbonne in the field of Byzantine history and hagiography. During this time, he also delved into the theory and practical application of painting at the French Academy of Fine Arts in Paris. Bishop Maxim is docent of the Divinity School at the Theological Faculty of the University of Belgrade, and previously taught Christian anthropology and sociology at the University of East Sarajevo. He was elected Bishop of the Western American Diocese of the Serbian Orthodox Church in North and South America in 2006. In addition to his Archpastoral duties, Bishop Maxim is a Professor of patrology at the St. Sava School of Theology in Libertyville, Illinois. He is the editor of Theology, the journal of the Faculty of Orthodox Theology, University of Belgrade. He also leads the Diocesan iconographical school.

Discernment in Times of Crisis: St Maxim the Confessor

In an era characterized by a the lack of discernment, Maximus’ teaching on good judgment seems to be crucial. This peripatetic monk belongs to a period of intense theological and cultural debates, where a gift of discernment was vital for finding spiritual direction and a clear theological belief. He accepted the teaching on discernment from the previous ascetic tradition, but he linked it to a wider context of ideas such as will, principle, love, wisdom, gnome, economy, etc. Man can discern the inner principles of creation, but this discernment springs from humility and truth and leads to perfect love and Eucharist. Among “different ministries that complete the Church's beautiful arrangement” he appreciates those “who with counsel discern the appropriate times for things”.