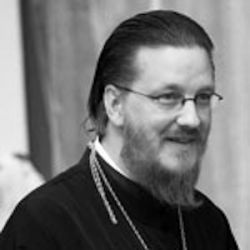 Monasticism and Marriage. A Common Life to martyria

John Behr was born in the U.K. in 1966. His father was a priest of the Russian Orthodox Church, his maternal grandfather was a Lutheran pastor.
After completing his first degree in Philosophy in London in 1987, John Behr spent a year studying in Greece. He finished an M.Phil. in Eastern Christian Studies at Oxford University. While working on his doctorate, he was invited to be a Visiting Lecturer at St Vladimir’s Seminary in 1993, where he has been a permanent faculty member since 1995. From 2007 to 2017 he has been the dean of the Seminary. He still edits the Popular Patristics Series for SVS Press.
His early work was on issues of asceticism and anthropology, focusing on St. Irenaeus of Lyons and Clement of Alexandria. After spending almost a decade in the second century, Fr John began the publication of a series on the Formation of Christian Theology, and has now reached the fifth and sixth centuries. He has recently completed an edition and translation of, and introduction to, the remaining texts of Diodore of Tarsus and Theodore of Mopsuestia. He has also published a synthetic presentation of the theology of the early centuries, focused on the mystery of Christ. His most recent project is a patristic-exegetic study on the Gospel of John.