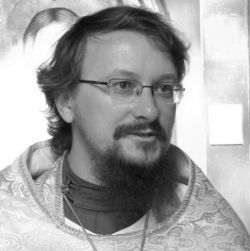 Igumen Arsenij (Sokolov) was born in Russia in 1968. After studying history at the University of Tomsk he became a monk. He was ordained deacon in 1992 and priest in 1998. He received his theological formation at the Moscow Theological Academy and the Biblical Institute in Rome. In 2012 he obtained a doctorate at the Ss Cyril and Methodius School of Post-Graduate and Doctoral Studies of the Moscow Patriarchate after defending a thesis on the Jewish and patristic exegesis of the Book of Amos. Since 2013 he has been an ordinary member of the Italian Biblical Association. In 2014 he was named representative of the Moscow Patriarchate to the Patriarch of Antioch.