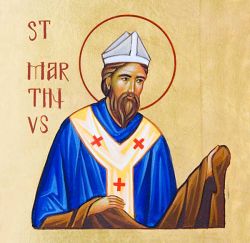 Martin was born in 317 in present-day Hungary, and was the son of a Roman soldier. We owe what we know of his life to his biographer Sulpicius Severus, thanks to whose efforts Martin became known and loved throughout the West.
Martin's father forced him to enlist in the imperial army, and at some point during his twenty five years of service to the emperor, Martin discovered Christianity and embraced the faith. Legend has it that the turning point in his life happened at the port of Amiens, when the young soldier, not yet baptized, cut his cloak in two with his sword and gave half of it to a poor man. That night, Martin had a dream in which he saw Christ dressed in the cloak he had given the beggar.
He left the army and joined Ilarius of Poitiers, with whose help he founded the first monastery in Gaul, at Ligugé.
Martin was elected bishop of Tours but remained faithful to his monastic vocation, and founded a cenobitic community in Marmoutiers where he lived for the rest of his life. Because the way of life he had chosen was based on fellowship in community, the sharing of possessions, common prayer, and preaching, Sulpicius called him "a man very much like the apostles."
Until the end of his life Martin travelled through the countryside, announcing the Gospel and creating the first rural parishes in Gaul. He died on November 8, 397 in Candes, near Tours, and was the first saint who was not a martyr to be commemorated by the undivided church.

Lord, God of tenderness and love,
Martin covered a poor man with his cloak,
and in doing so clothed you;
you, in baptism, clothed him with new humanity in Christ,
and made him a pastor of your people.
As we celebrate his memory, grant that
we may revive our compassion for those
who are last in our society,
and that we may turn our hearts towards you, O Father.
Through Christ our Lord.

On this day in the year 826, Theodore the Studite, a confessor of the faith and reformer of monastic life in the East, concluded his radiant earthly parable.
Born in 1759 into a noble family of the Byzantine capital, Theodore entered a monastery in Asia Minor when he was twenty-two years old, together with his father and his brothers.
He was a steadfast witness of the apostolic faith, and experienced exile and persecution during his lifetime. During the iconoclastic battles, he defended the use of images in the liturgy and denounced the behavior of the emperors as inconsistent with the Gospel, attracting hostility from many sides.
When Arab invasions forced him to return to Constantinople, Theodore was elected igumen of the monastery of Studion. He had a profound desire to renew monasticism by strengthening the brothers' community life, and under his leadership Studion became an important and influential monastic center. Studio's Typikón, or monastic rule, inspired countless other monastic rules in the Byzantine East.
Theodore's Christian testimony became known in the Western world through his collected Cathechisms. In these lessons, the igumen of Studion broke the bread of the Word daily for his brothers, strengthening them in their faith and inviting them to follow Christ in a radical way.
His writings, which have a profoundly human and Christian as well as a monastic message, have offered spiritual nourishment to many generations of Eastern Christians.

On November 11, 1855 the philosopher and Lutheran theologian Soren Aabye Kierkegaard, who gave witness to a spirituality directly inspired by the Gospel, died at the age of forty-two in his native Copenhagen.
Soren inherited his father's love for the great German pietists. When his father died he received a generous inheritance, which allowed him to dedicate himself to intellectual research and publish at his own expense the many books he wrote during his brief lifetime.
Educated in a world pervaded by Hegelian thought, Kierkegaard rebelled inwardly against his teachers. He set himself the task of searching for a truth different from that of idealism, and proposed that truth could be reached through the "way of life." For Kierkegaard, Christian truth is not derived from the rational unity of a system of thought, but from personal experience. For such truth alone, he argued, it is worth living and dying.
For Kierkegaard, an encounter with God can only happen in the humiliation of the intelligence, when the seeker, giving up every illusion of being able to know truth through his own efforts, is caught up and drawn into the meaning of eternal things and gives witness to these things in the company of others, day after day.
The Danish theologian expressed this outpouring of meaning in religious experience most memorably in his poetic works and in brief but dense religious meditations. The influence of his writings on the ethical and religious thought of the nineteenth and twentieth century was immeasurable. With his evangelical outspokenness he criticized respected thinkers and church leaders of his time, breathing new life into Christian faith and culture at a time in which they were in danger of running aground on the shoals of dogmatism.

LUTHERANS:
Martin of Tours, bishop and benefactor in Gaul