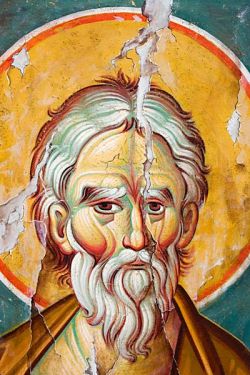 Andrew, the apostle, the first called

Today the Eastern and Western churches commemorate Andrew, an apostle of the Lord.
The son of Jonah and the brother of Simon Peter, Andrew was a native of Bethsaida, and both he and Peter were fishermen. A disciple of John the Baptist, Andrew understood the implications of John's witness to Jesus of Nazareth, and began to follow the Lamb of God. He was the first disciple Jesus called, and he led others who were waiting for the Messiah to Jesus: his brother Simon, the boy with the five barley loaves and two fishes, and the Greeks who had come up to worship in Jerusalem.
According to tradition, after Jesus' death and resurrection Andrew announced the Gospel in Syria, Asia Minor and Greece. Having become a fisher of men by announcing the foolishness of the Cross, he died in Patrassus crucified like his master, the Galilean rabbi of whom he had exclaimed, "We have found the Messiah!" (John 1.41).
In the fourth century, Andrew's relics were transferred to Constantinople. They were later brought to the West, but in 1974 Pope Paul VI returned them to the church of Patrassus as a sign of his love for the Orthodox churches, which venerate Andrew as the first archbishop of the church of Constantinople.

God of truth,
you gave Andrew the grace
to obey Jesus' call without hesitation
and to follow him without delay:
grant that we may live
in great openness to your word,
and we will rejoice, knowing that we are
counted among the friends of Christ,
your Son and our Lord.

On November 30, 1943 Etty Hillesum, a young Dutch Jewish woman of Russian ancestry, died after just over two months of confinement in the concentration camp of Auschwitz.
Esther (Etty) Hillesum was born in 1914 in Middelburg, Netherlands. Her father was a schoolteacher, and her mother had recently fled the Russian pogroms.
Vivacious, opinionated and accomplished in her studies, Etty was above all capable of an intense inner life. This allowed her to give meaning to life's tragic events, and she found herself able to carry on a dialogue with God even in the abyss of despair and absurdity that was the Holocaust.
Etty studied law and psychology in Amsterdam. When Nazi troops occupied her country in 1940, she realized that the fate of Holland's entire Jewish community was at stake. Encouraged by her German analyst and friend Julius Spier, Etty began to keep a diary in which, beginning on March 8, 1941, she recorded her spiritual journey until her death at Auschwitz.
We all know, even if some of us would like to forget, the number of Jews who were killed in the Holocaust: six million. The posthumously published writings of this young Dutch Jewish woman, who was an eyewitness testimony, can help us remember how desperately people searched for meaning in atrocities whose magnitude demands of those who were not present the one response of an attentive, silent remembrance.