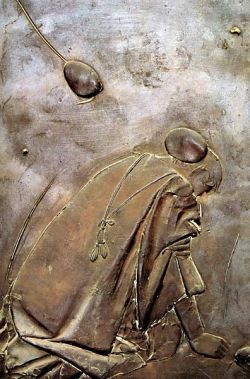 San Salvador, March 24, 1980: at 6:30 pm, as he was celebrating the Eucharist, the archbishop Oscar Arnulfo Romero was struck down by a gunman.
He was born in Ciudad Barrios into a family of mixed ethnicity. While working as a carpenter in his city, he gradually discovered his vocation to the priesthood. After studying in Rome during the Second World War, he returned to his country and was given increasingly important responsibilities in the church of El Salvador.
After the death of the archbishop Luis Cháver y Gonzales, who had been a staunch defender of the poor and oppressed, the archdiocese of San Salvador was profoundly divided. Oscar Romero was chosen as Cháver's successor to the general satisfaction of the conservative sectors of society, who saw his spirituality as innocuous and disincarnate.
But in his country's situation of political and social distress, Monsignor Romero began to denounce the violence and injustice suffered by the poor and the peasants of El Salvador, courageously exposing the chasm between daily realities and the demands of the Gospel.
He promoted dialogue and reconciliation in the Church and in his country, and in his three years as bishop he became immensely popular. Together with the support of the poor, however, he attracted the hostility of the powerful and of part of his country's Catholic hierarchy.
Faithful to his own episcopal motto, Romero did not cease to "feel with the Church." He sacrificed everything, and finally his life, in order to promote a genuine conversion of the ecclesial body, convinced that only through such a conversion would the Church become capable of denouncing the world's darkness.

O Lord, your servant Oscar Romero
preferred to be persecuted and die
rather than deny his poor and oppressed
brothers and sisters:
may the gift of his life,
poured out as an offering for the poor,
help us see our faith in you as precious
and make our witness for justice in society more transparent.
Through Christ our Lord.

Paul-Irénée Couturier, a Catholic priest, died in Lyons in 1953. The sincere and incontrovertible ecumenical witness he gave with his life helped pave the way for the Catholic Church's entrance into the ecumenical dialogue during the Second Vatican Council.
Couturier was born in Lyons in 1881. After receiving a scientific education, he went to seminary and was ordained a priest. At the age of 39 he had a pivotal experience: in his desire to alleviate the sufferings of the Russian immigrants who lived in the Lyons region, he acquainted himself with their way of life and their faith, and became convinced that profound unity between Eastern and Western Christians already existed.
His growing interest in Orthodox Christianity led him to the monastery of Chevetogne, where he was profoundly moved by the writings of Cardinal Mercier and Fr. Lambert Beauduin. He organized what became the Week of Prayer for Christian Unity, convinced that the heart of ecumenism was Jesus' own prayer, "that they may be one."
Couturier was one of the founding members of the Dombes Group, which promoted mutual acquaintance and understanding between French Catholics and Protestants. He also laid the groundwork for a vast network of epistolary relationships among Christians of different denominations. The friendship and respect that grew out of these relationships became, in turn, the fertile terrain in which the great ecumenical dialogues developed.
When Paul Couturier died, the messages of condolence received by the bishop of Lyons from all of the Christian churches gave witness to unanimous gratitude for the evangelical commitment of a man who had given ecumenism a soul.

ORTHODOX CHRISTIANS AND GREEK CATHOLICS:
Vigil of the Annunciation of the most holy Mother of God and ever-virgin Mary
Artemon, bishop of Seleucia
Alexis of Goloseevo (d. 1917), monk (Ukranian Church)