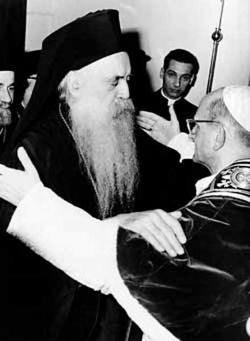 ATHENAGORAS I and PAUL VI

Athenagoras, archbishop of the church of Constantinople and Ecumenical Patriarch, died in Istanbul in 1972.
Aristokles Spyrou was born on March 25, 1886 in a Greek village near the Albanian border. At the age of twenty he became a monk, and he began his pastoral mission immediately, first as deacon at Monastir, then as bishop of Corfù, and finally as archbishop of the Greek Orthodox Church of America. Everywhere he went, he was a tireless servant of the cause of unity among the Christian churches. His entire life's work was a ministry of reconciliation, made possible by his awareness of the poverty and greatness of every human being.
His election as Ecumenical Patriarch of Constantinople in 1948 did not change his simple monk's heart, but it did do a great deal to draw the Christian denominations closer together. The decision of the Orthodox churches to join the World Council of Churches, the presence of Byzantine observers at the Second Vatican Council, the preparation of a pan-Orthodox synod, the removal of the mutual excommunications between Rome and Constantinople, and the historic meetings between Athenagoras and Pope Paul VI were some of the visible expressions of Athenagoras' ardent inner desire for unity.
When he felt death drawing near, Athenagoras chose to prepare himself alone to meet God. He died during the octave of the feast of Saints Peter and Paul, apostles of the undivided Church who are commemorated on the same day by Catholics and Orthodox.

Lord God,
in Athenagoras you gave us
an ardent witness of your Church's unity
and an audacious and wise pastor:
grant that the sister churches of East and West
may soon be united in communion and peace
and confess together your Son Jesus, who is risen
and lives forever and ever.