Where are we along our travel? 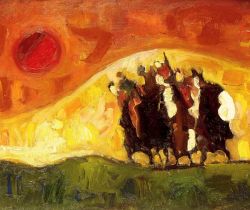 TRENTO LONGARETTI, Fugitives and yellow hill, 2001
Patristic reading
We are all like those who intend to travel to the holy city... Let each of us learn his own situation and where he is!

We are all like those who intend to travel to the holy city. When they left a certain town some travelled five miles and remained there, some others travelled ten miles, others as far as half the distance, some did not travel at all but merely left their town and remained outside the gates in the "slums" of the town. Those who were on the road sometimes travelled two miles and then they were lost and returned back or they travelled two miles and returned five. Some of them travelled as far as the holy city but they remained outside and did not enter it.
Our own situation is similar to that of those people. There are some amongst us who left the world and entered the monastery intending to obtain the virtues. Some achieved a little and then stopped. Some others achieved a little more. Others succeeded in reaching half the way and then they stopped there. Others did nothing and while they gave the impression that they left the world, they remained in the things of this world with the passions and in the "slums" of the world. Some achieved a little good but lost it or others lost more than they gained. There are also those who attained the virtues but they were proud and they debased their neighbour and thus remained outside the city and could not enter. Therefore, they also did not succeed in obtaining their purpose. In spite of the fact that they reached the city gates, they remained outside and thus they failed to achieve their aim... Therefore let each of us learn his own situation and where he is!


Dorotheos of Gaza, Pratical Teaching
on the Christian Life X,107