Since ancient times pottery, simply obtained by firing a mix of earth and water, enables people to cook their food and decorate their houses. Earthenware was thus very well known and exploited by Hittites, Semitic people, Greeks, Etruscans, and Romans.

In China, already in the third millenium B.C., efficient kilns enabled local clay which was particularly rich of alumina to be fired at high temperatures. By using this ancient Chinese technique the so-called “stoneware” pottery has been produced. Stoneware is a special type of very hard, non-porous, partially vitrified ware, which is particularly suitable for making food containers and for creating artistic objects. 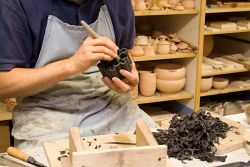 We buy special clay in France or here in Italy in the region near the monastery: several tests which have been carried out on over time have enabled us to produce nowadays stoneware pottery using the local clay of the moraine between Ivrea and Biella. Bose wares are therefore simply made by clay, water, air, and fire; they are shaped by the potter’s hands; and they are characterized by the natural and soft colours of the local moraine...

Our potters were trained in France by Gérard Pott, former student of Daniel de Montmollin, and in Italy by Gianni Beccafichi, one of the most known Italian potters.

Our pottery is made exclusively by the potter's hands and thrown on the wheel, glazed with natural colours and ashes (e.g., ashes of hay, vine-shoots, lavender, or fern), and fired at 1300° C, according to ancient techniques. 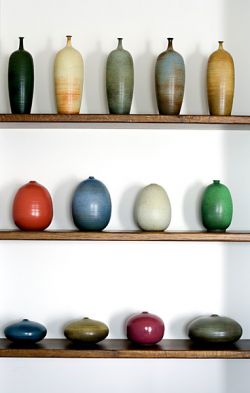 The manufacturing process lasts about three weeks. Each object is first thrown on the wheel, dried, and fired at 950° C; the resulting bisque, after being glazed, is then fired again at 1300° C. After a slow cooling process, these soft-coloured and silent creations sing in praise of the Lord…

raku pottery of Bose Bose
a plate removed from the kiln

raku pottery of Bose
...removed from the hot kiln with long pliers...

The Japanese term raku, which means “joy”, is derived from the site from which clay was dug in Kyoto in the late sixteenth century. For fifteen generations, it has been the title and seal used by a lineage of potters whose work formed the central tradition in Japan.

Raku is considered the traditional method for creating bowls for the Japanese tea cerimony. The artistic theoretical background which lies behind the beauty of Raku is the philosophical thinking of Zen Buddhism.

Raku is a form of pottery characterized by low firing temperatures (resulting in a fairly porous body), lead glazes, and the removal of pieces from the kiln while still glowing hot.

Raku wares are hand-made, each with a unique shape and style. They are made from a stoneware clay body, bisque fired at 900° C, glaze fired at about 1000° C in special kilns. Pieces are removed from the hot kiln with long pliers, placed in masses of combustible material (e.g., straw, or sawdust), and covered in order to provide a reducing chamber for the glaze, and to stain the exposed body surface with carbon.

This process is known for its unpredictability, and for the effects which obtains: the glaze recipe “crackle” or craze, presenting a cracked, old-fashioned appearance (the so-called “craquelé”).