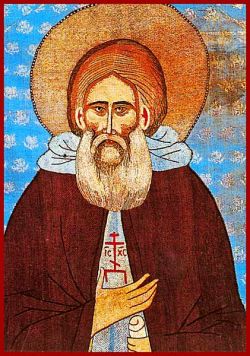 In 1392 the Russian monk Sergius of Radonezh died at the Lavra of the Trinity, which he had founded.
He was born in Rostov, near Moscow, and baptized Bartholomew. When Tartar invaders arrived, he fled with his family to Radonezh.
At the death of his parents, Bartholomew went to live in the forest with his brother, and began to lead a life of prayer and solitude in hostile, inhospitable surroundings. He took the monastic habit, changed his name to Sergius, and built a small wooden chapel dedicated to the Trinity.
Little by little, the forest of Radonez filled with people who wanted to partake of the poor, simple monasticism practiced by Sergius, in the hope of enjoying the fullness of their freedom as children of God.
When the Patriarch of Constantinople, upon whom the Russian church then depended, ordered Sergius to adopt the cenobitic rule of Greece's Studite monasteries, Sergius did so and went on to found monastic fraternities throughout Russia. He was generous and attentive in offering his advice and services to his country's Church and political leaders, in an age of great turmoil.
Sergius preached universal, cosmic peace and taught generations of monks to pray that the world, torn apart as it was by hatred, would be pervaded by the love whose source is the Trinity. Inspired by Sergius' teachings, the painter Andrei Rublev was able to reach an incomparable depth and tenderness in his iconographic art.
Together with Seraphim of Sarov, Sergius is Russia's best loved and most venerated saint. His Holy Trinity Monastery is still the theological and spiritual center of the Russian Orthodox Church.