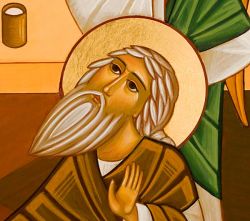 THE ICONS OF BOSE, Abraham

Abraham, father of all believers in the one God, prophet

The Bible has two special titles for Abraham: "friend of God" and "father of all believers."
At God's insistent call, Abraham leaves his father's country and his people, and sets out for the place the Lord himself intends to show him. With this gesture of faith on Abraham's part, communion between God and humanity is restored, and God's blessing, destined to reach all living beings, begins to be fulfilled. In Abraham, the three great monotheistic religions have a common patriarch and a certain unity, because it is through Abraham that God bound himself in an eternal covenant with all people.
Together with his wife Sarah, Abraham listens obediently to God's word and puts it into practice without delay. Both became models of faith in the one God. Abraham's willingness to sacrifice Isaac, his only-begotten son, the child of the promise, is an example of hope against all hope: Abraham was certain that God is able to keep his word even when he seems to contradict it.
It was Abraham's faith that allowed him to enter into God's secrets, intercede for all people, and welcome all those who abandon themselves to the Lord, allowing God's will of life to be fulfilled in them.

According to the Letter to the Hebrews, Abraham is above all the believer whose faith, put constantly to the test, manifests itself as obedience.
According to synagogue tradition, Abraham is above all the ancestor, the one Jews call "our father Abraham."
But the narrative about Abraham reveals another aspect. Although the vocabulary of hope is not found in the Hebrew text that tells the patriarch's story, Abraham's specific destiny is to live under its banner. Hope inaugurates the holy story, marks the different episodes of patriarchal existence with its seal, decides the fate of Abraham's descendants, and opens up new possibilities to humanity. From the moment YHWH speaks to Abraham, everything is renewed, or rather called to renewal.

(Robert Martin-Achard, from Abraham, Our Contemporary)

Merciful God
who gave us Abraham, the father of believers,
you willed that all the nations of the earth
be blessed in him and his descendants:
look upon the people of the covenant
and the promises,
and upon the people of the prophecies
who invoke you as the Merciful One,
and unite all those who believe in you,
the One God, as soon as possible,
through the revelation of Jesus Christ,
who is blessed now and forever.

During the night of April 7, 1925, Tikhon, Patriarch of Moscow and All Russia, gave up his struggle against illness, bringing to an end a tragic yet extraordinary human story.
The son of a provincial parish priest, Vasily Bellavin was born in 1865 in Toropec, near Pskov. After his studies, he had to decide between marriage and monastic life before his ordination to the priesthood. He chose the latter, and took the name Tikhon.
His gifts were evident to all, and he was consecrated bishop of Lublin at the age of thirty-two. In Lublin, as in the other cities where he later carried out his episcopal ministry, he became known as a moderate, equable man and a true listener capable of dialogue with Catholics and Protestants. He went so far as to propose steps towards unity, which in the case of the Anglican Church soon bore fruit.
When the powerful superior of a women's monastery had him expelled from the diocese of Lublin, Tikhon was sent to the United States to serve as bishop. In America, where he was able to express his openness of mind, he became a spiritual father to all of the country's Orthodox and laid the foundations for a single American Orthodox church, which never came into being.
He moved to Vilnius in 1907, went on to Jaroslavl', and in 1917 became Metropolitan of Moscow. In that year he presided over the Russian Orthodox Church Council, during which the Church restored the title of Patriarch and conferred this title upon Tikhon in December of that same year.
Although he had kept his distance from politics and had tried above all to comfort the faithful, interceding with God in order to sanctify a Church destined for martyrdom, Tikhon now faced a long calvary. Removed from office in 1923, arrested and confined, he continued to let his heart's inner light illuminate the extreme solitude of Russia's Christians. In doing so, he gave a sign of the eschatological hope that has always been the truest soul of Russian Christianity.

My children! Even if others should consider weakness this holy restraint of the Church, these appeals we make to tolerate malice and hostility against Christians, and the way we uphold Christian ideals in the face of both trials and normal human desires for the good things of the earth and the comforts of worldly living; and even if the joy that finds its wellspring in suffering on account of Christ seems "intolerable" and "cruel," we implore you, for the sake of all of our Orthodox children, not to abandon this Christian attitude, which alone leads to salvation. We beg you not to abandon the way of the cross, which God sent us from above, in favor of the worldly way of violence and revenge. Do not let your heroic Christian steadfastness be weakened by returning to an idea about defending the Church's welfare, which would abase the Church and demean you to the level of the actions of those who blaspheme against the Church. Lord, protect our Orthodox Russia from such horrors!

(Tikhon of Moscow, from the Letters to the Faithful).