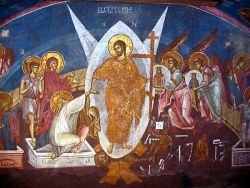 By remembering those who have died in Christ, Christians renew their hope in life without end...

Memorial of the departed in Christ

Christians walk by faith during their pilgrimage on earth, strengthened by the mutual support they give one another as members of God's people. All of Christ's faithful, those still living and those who have died, are bound to one another in a communion of love and prayer.
This is the deepest reason for celebrating today's memorial of all those who have died in Christ, which falls, significantly, on the day after the feast of the Communion of All Saints of heaven and earth.
In the Church's Eucharistic celebration, Eastern and Western Christians have always remembered their faithful who have returned to the Father. The Eastern churches set apart several days of the year on which to remember the departed.
In the West, an abbot of the monastery of Cluny, Odilon, instituted a liturgical office in 998 as a way of commemorating the brothers of the community who had finished their pilgrimage on earth. At that time, the influence of the monks of Cluny was such that this liturgical custom soon became common practice throughout the Latin church.
In several churches of the Reformation, the commemoration of the departed in Christ was suppressed because of its strong tie with the doctrine of purgatory, an association insisted upon by Catholics. The rediscovery of the feast's original meaning has led many Protestant communities to re-incorporate it into their worship.
By remembering those who have died in Christ, Christians renew their hope in life without end. Jesus promised those who remain in his love that death would not have the last word in their lives, but would be a passage to fullness of life, because love is stronger than death and never ends.

The biblical scholar and Lutheran theologian Johann Albrecht Bengel died in 1752 at the age of seventy-five.
He was born in Winnenden, Germany in 1687. During his university years in Tubingën he became active in the pietist movement, sharing its mission to help the Reformation return to its spiritual roots.
When he was called upon to educate the future pastors of his church, he made it his priority to introduce them to the inner life and to the study of the Bible. Wishing to provide his students with a place of retreat and encourage their concentration, he created a community for research and prayer.
Steadfastly faithful to his Church and its authorities, Bengel promoted a theology aware of the primacy of the Church's eschatological hope, thus avoiding the individualistic tendencies into which part of the pietist movement had drifted. Bengel also avoided the excessive speculation that characterized much of the Western theology of his time, convinced, as was Evagrius of Pontus in the third century, that only those who truly know how to pray can be theologians.
In the last years of his life, Bengel edited a critical edition of the New Testament, to which he added a commentary that strongly influenced John Wesley and the English Methodists, as well as other later writers. Several years after he had become prelate of Alpirsbach, Bengel died in the peace he had cultivated all his life.

Today the Malankar Orthodox Church commemorates Gregorius Geevarghese, a bishop of Parumala in India's Kerala region.
He was born in 1848 in Mulamthuruthy, India, into a family that had always given priests to the Orthodox Church. Gregorius began to serve in the Church at the age of ten. In 1866 he was ordained to the priesthood by the bishop Mar Coorilose of Antioch, in whose company he then visited all of the Malankar churches.
Gregorius became an expert in ancient Syriac, and at the age of twenty-eight he was called upon to leave the monastery of Vettical Dayara, where he had been living quietly, in order to be consecrated bishop.
A prayerful man who had also received an excellent theological education, Gregorius Mar Parumala became known for his pastoral warmth and charity and his willingness to listen. In his twenty-six year episcopal ministry he was unfailingly attentive in managing and caring for his diocese.
At his death on November 2, 1902, he had become so popular that in 1947 the synod of the Malankar Orthodox Church decided to canonize him, an extremely rare event in India's Christian tradition.

ANGLICANS:
Commemoration of the faithful departed (All Souls' day)

MARONITES:
Commemoration of the faithful departed
Aerodina and her companions of Persia (4th cent.), martyrs