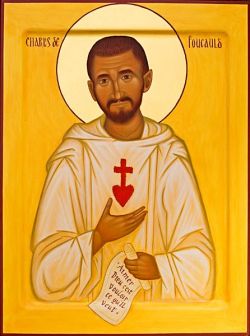 Born in Strasbourg in 1858, Charles de Foucauld was orphaned at a young age. After spending his adolescence with wealthy relatives and serving a turbulent career in the army, he became fascinated by the Arab world and made several trips to Morocco, where he discovered the people and their culture.
At the age of twenty-eight he returned to his Christian faith, and at the same time recognized his vocation. "As soon as I began to believe that a God exists, I understood that I had to live for him alone," he wrote several years later.
Charles entered the French Trappist monastery of Notre-Dame des Neiges, took the name of Br. Marie-Albéric, and made his monastic vows. But his desire to seek God in extreme lowliness and poverty, by taking the last place as Christ had done, led him to leave the monastery with his superiors' consent and travel first to the Holy Land, and then to the Sahara.
Charles was ordained a priest and began to live among the Tuareg tribes in the Algerian desert, offering a sign of universal love with his silent presence. During his years in Béni-Abbès and Tamanrasset, he freed slaves and announced the Gospel to them, translated the Gospels into the local language, and made friends with his Muslim neighbors, who lived as he did, in total abandonment to God.
It was at Tamanrasset, in the midst of French-Arab hostilities, that Charles de Foucauld was killed on December 1, 1916, probably by error. "Live as if you had to die a martyr today," he had written several years earlier in his diary.
As in the parable of the grain of wheat that bears fruit only when it falls to the ground and dies, Charles de Foucauld had no companions during his earthly journey of intimacy with Christ. No one was at his side as he suffered and died to himself. Yet after his death, he found many disciples who chose to embrace Christ's Cross as he had done, certain that they would thus be able to embrace the One who had hung from it.

God of love,
in the communion of saints
we celebrate the memory of Charles de Foucauld,
your faithful disciple,
who walked in poverty, solitude
and contemplation:
allow us, like him, to be permeated
by the love of your Son Jesus,
and help us follow him always,
in every situation, because he is Lord
and lives forever and ever.