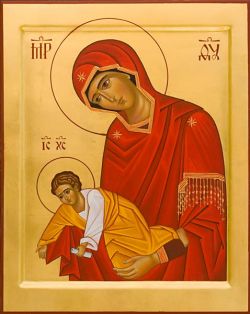 Mary, the daughter of Zion

Mary, daughter of Zion and figure of the heavenly Jerusalem

In the first centuries, the feast of Mary's conception by Joachim and Anne was celebrated on this date in the Eastern churches. In Byzantium, the feast was included among the greatest festivities of the liturgical year for a certain time.
Adopted in the West in the tenth century, the feast of Mary's conception was given a very precise theological interpretation by the Roman Catholic Church, which culminated in 1854 with the proclamation of the dogma of the Immaculate Conception.
The Orthodox churches do not feel the need for a similar dogmatic definition, which is tied to the Western theological concept of original sin. For them, Mary's conception has the value of a sign: through the divine intervention that was needed to heal Anne of her infertility, all of humanity has been healed of its sterility, brought on by sin, and has become the womb capable of welcoming the Word's Incarnation. It is the Lord himself who, in his infinite mercy, prepares the way for his decisive intervention in history.
At the Bose Community, where Catholics, Protestants and Orthodox celebrate together, today's Marian feast has been interpreted on the basis of Scripture, and the figure of Mary is placed in the eschatological context of Advent.
It is possible to recognize Mary as the "daughter Zion" of whom the Old Testament speaks: Luke's Magnificat presents this young woman from Nazareth as a figure of Israel's poor, of that small remnant the Lord has lovingly kept for himself so as to bring salvation to all the nations.
In the New Testament, Mary is also a figure of the heavenly Jerusalem, the bride adorned for the Lord, her bridegroom, who comes down from above and gathers all of humanity to himself in the Kingdom.
As we remember the conception of Mary during the season in which we await the Lord's coming, we have the opportunity to remember the vocation of every human being. We find this human vocation testified in history every time the children of Israel and of the Church accept to be a little flock, waiting for the Messiah and hoping against all hope.

Lord our God,
as we celebrate Mary, daughter of Zion
and figure of the new Jerusalem
that descends from heaven,
we await the coming of your Son Jesus Christ in glory.
Hasten the day of his coming,
and all the nations, together with all of Israel,
will find salvation in your eternal kingdom.
We ask you this through the Holy Spirit,
who consoles us and intercedes for us
now and forever.

ORTHODOX CHRISTIANS AND GREEK CATHOLICS:
Forefeast of the conception by Anna of the most holy Mother of God
Patapius (6th cent.), monk