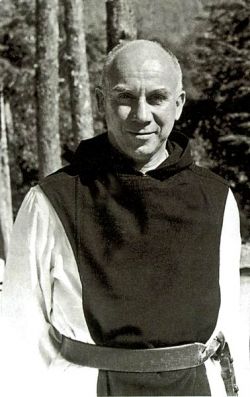 Thomas Merton, a Trappist monk of the American monastery of Gethsemani, died in Bangkok on December 10, 1968, electrocuted by a defective fan. This accident brought to an end a human and spiritual journey in which nothing had been superficial or left to chance.
Merton was born in 1915 in Prades, in the French Pyrenees, to an American mother and a father from New Zealand, both Protestants. His mother died when he was young, and with his father often absent, Thomas grew accustomed to solitude. As he neared adulthood, he felt increasingly like a stranger among his peers.
He studied at Cambridge, and after his father's death he transferred to Columbia University in New York. There he sought to communicate the fruit of his complex inner pilgrimage to others by teaching literature and writing fiction. But it was when he discovered Christianity, and then recognized his monastic vocation only three years after his baptism, that Thomas found the way of life that would give roots and wings to his love for solitude.
He became a Trappist monk, and after more than ten years spent in the enclosure of the monastery, he discovered that he had become a symbol of the contemplative life because of his spiritual autobiography, The Seven-Storey Mountain, which earned him worldwide fame.
Merton had mixed feelings about becoming a celebrity, and although he continued to write prolifically, he spent the last years of his life as a hermit. In his growing solitude he progressively opened his heart, giving witness to his compassion and concern for every form of human suffering. The walls of his hermitage defined the space in which he carried each of his brothers and sisters in prayer, using the force of his inner life to break down the sturdiest walls that separate people from one another.

December 10, 1968 was also the day on which Karl Barth, a pastor of the Swiss Reformed church and one of the greatest theologians of the twentieth century, finished his earthly parable.
Born in Basel in 1886, Barth studied in Bern, Berlin, Tubingen and Marburg. He became a pastor in Geneva, and then in Safenwil, Argovia. For some time he was committed to social issues and was an active member of the Socialist party. During the years of the Nazis' rise to power, Barth was one of the leaders of the Confessing Church in Germany. In 1935 he was exiled to the University of Basel, and dedicated much of the rest of his life to writing his colossal Dogmatica Ecclesiale.
Barth's theology was the fruit of his desire to announce the Gospel in a concrete way, and like the theology of Anselm and Kierkegaard, it was an attempt to explain faith beginning with the experience of faith itself. For Barth, the Christian message does not originate as an answer to human anxiety. Instead, it comes from listening to a God who is himself the center from whom theology radiates. It is God, in Christ, who takes the initiative in entering into dialogue with human beings. Because the iniative of God is revealed in Christ, it implicates the human person in the totality of his vocation. This was the theme of a series of conferences Barth gave in 1956 on "the humanity of God."
Barth based his preaching on these convictions and asked his listeners to express their obedience to God by working to restore the unity of the churches of Christ, and by struggling alongside every victim of sin, injustice and violence.
At his death, Christians of every church and continent attended his funeral, expressing their gratitude for the testimony Barth had given to Christ with his entire life.

LUTHERANS:
Heinrich Zütphen (d. 1691), witness to the point of bloodshed in Dithmarschen