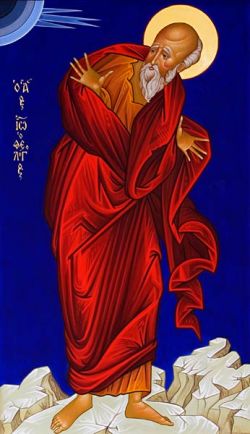 John was the son of Zebedee and Salome. He was a disciple of John the Baptist, and began to follow Jesus when his first master pointed to the man from Nazareth, calling him the Lamb of God who had come to take the sin of the world upon himself.
Called by Jesus to understand the profound implications of the new commandment of love, John accepted the invitation to remain close to his Master and Lord. He learned to love through his experience of daily intimacy with Jesus, and for this reason he was called "the beloved disciple."
Together with his brother James and with Peter, John was a privileged witness to several critical episodes in Jesus' life: the raising of Jairus' daughter, the Transfiguration on Mt. Tabor, and the agony of Gethsemani. In the most crucial moment, that of Jesus' passion and death, John was the only disciple who remained next to Jesus and shared, with Mary, the last instants of his Lord's life on earth.
After the dawn of the Resurrection, John often appears together with Peter in the fourth Gospel, as if to suggest that the Church is founded on a dual presence: that of the disciple who loves because he has known and contemplated the Lord's love, and that of the disciple who loves because he has been forgiven much.
After Pentecost, John left Jerusalem, and according to tradition he lived first in Samaria and then in Ephesus. The New Testament writings that bear his name - the fourth Gospel, the three Letters, and the book of Revelation - testify to the existence of Christian communities founded and guided by John, perhaps in Ephesus.
John's feast, which rightly follows the celebration of his Beloved's birth, invites the Church to look at the world with a gaze transformed by the contemplation of God's love.

Lord God,
through the Incarnation of your Son Jesus Christ,
you filled his beloved disciple John
with your presence:
fill our hearts with a love that will
tranfigure all of our affections
and lead us to contemplate you,
the one true God,
who lives now and forever.