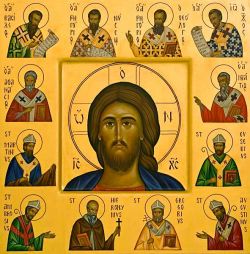 Christ with the Eastern and Western fathers

Today the Eastern churches and the Western monastic calendar commemorate the Church father Gregory of Nyssa, the brother of Basil of Caesarea.
Gregory was born in Cappadocia around 335 and studied rhetoric. After several years of marriage, his wife died, and Gregory entered the monastery on the Iris river that his brother Basil had founded.
The two other famous Cappadocians, Basil and Gregory of Nazianzus, held him in low esteem because of his love of rhetoric and his lack of diplomatic skills. Basil still had Gregory elected bishop of Nyssa in 372, hoping that he would succeed in checking the growing hostility of the Arians. At first, Gregory confirmed his brother's doubts about his abilities: he was deposed and exiled under the accusation of having mismanaged the Church property entrusted to his pastoral care.
After Basil's death, however, it was Gregory who gave the faith of the great Church a theological formulation. He became one of the early Church's greatest theologians, and was certainly the most speculative of the fourth-century Greek fathers. At the same time, he showed great courage and aptitude in consolidating support for the Nicene Creed and in contributing to the restoration of peace in the church. His systematic theology became the foundation on which both the ascetic doctrine and the mystical reflection of the Christian East would later develop.
When Gregory died, probably in 395, he was considered a pillar of orthodox, together with Basil and Gregory of Nazianzus.

Lord God,
you gave your Church Gregory of Nyssa,
who was able to discern the truth
and express it to his brothers and sisters:
renew this grace in the Church today
so that Christians may give witness to you
with courage and wisdom.
Through Christ our only Lord.

COPTS AND ETHIOPIANS (1 tubah/terr):
Stephen, head of the deacons and first martyr