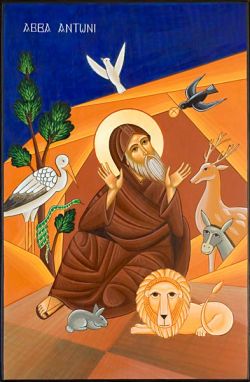 Antony was born around the year 250 in Qemens, south of present-day Cairo, into a wealthy family.
When he was about twenty years old, he heard the words of the Gospel, "Sell what you have, give it to the poor, and come follow me." As if the reading had been addressed directly to him, he lost no time in putting it into practice. He sought guidance from an elderly and holy ascetic who lived near his village, as well as from other ascetics who lived in the area. After some time he decided to go into seclusion on a mountain near Pispir, where he lived as a recluse for twenty years in an abandoned fortress.
He underwent severe temptation and struggle, which made him a man of proven spiritual experience, full of mercy, humility, discernment, and love. "No one who has not undergone temptation will be able to enter the kingdom of heaven: take away temptations, and no one will be saved," goes one of his famous apophthegms.
Sought as a spiritual father because of the charismatic radiance of his person, Antony accepted many disciples. Eventually he set out for the "inner desert," heading towards the Red Sea in search of ever greater solitude. He died on a mountain, and at its foot a monastery that bears his name still exists today.
During the many years he spent seeking God, Antony did not hesitate to leave the peace of the desert several times in order to bear witness to his solidarity with others. He went to Alexandria in 311 to encourage Christian martyrs during the persecution of Maximinus, and he later returned to defend the bishop Athanasius in his combat against the Arians.
His fame and the diffusion of his Life, written by Athanasius, earned him many disciples throughout the Christian world. He received the title "father of all monks," by which he is remembered today in the Coptic Church.

God of heaven and earth,
you inspired Antony to go into the desert,
where he fought evil and found life in you alone.
Grant that we may renounce ourselves as he did
and defeat every temptation,
so as to love you above all else.
Through Christ our only Lord.