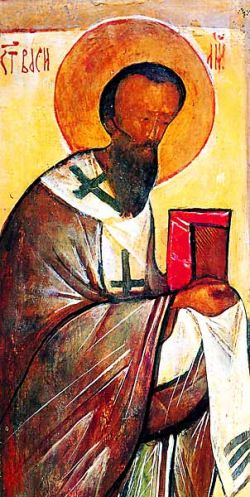 Basil was born in Caesarea of Cappadocia around the year 330 into a family of longstanding Christian tradition.  During his studies in Caesarea, Constantinople and Athens, he met poets, philosophers, historians and orators. He returned to his own city in 355, and then set out again on a long journey, during which he became acquainted with monastic life in Syria, Palestine, Egypt and Mesopotamia.

After receiving baptism, Basil felt called to a life of radical faithfulness to the Gospel - a desire that can be felt in every page of his writings.   He withdrew to the solitude of Annesi, where he was soon joined by Gregory of Nazianzus, and devoted his time to prayer, manual work, and the study of Scripture and the works of Origen. Having been instructed by God through the Scriptures, Basil began to attract other companions who shared his one desire to live according to the new commandment of love. In 370 he became bishop of Caesarea.  In this ministry he devoted all of his energy to serving God's word and opposing those who proposed reductive interpretations of Scripture.  He also encouraged the faithful to care for one another's needs, giving special attention to the poor and the weak.

In the Byzantine churches, he is remembered in particular for the Divine Liturgy that bears his name and is celebrated on major feast days, and for his valuable instructions on the monastic life.  His Asceticon is at the heart of every rule and every reform of cenobitic life in the East, and it is known and appreciated in the West thanks to Rufinus of Aquileia's Latin translation and to Benedict's reference, in his own Rule, to "the rule of our holy father Basil."

Basil died on January 1, 379 on the eve of the Council of Constantinople, which he had expertly helped to prepare by serving unity and communion in the Church and among the churches.  He also contributed to the Council by helping to formulate, together with the other great Cappadocian fathers, the Orthodox theology of the Holy Spirit and the Trinity, which is at the heart of the creed of faith common to all of the Christian churches.

Today the Patriarchate of Moscow's calendar commemorates John of Kronstadt, one of the best loved priests in the history of Russian spirituality.

After his father's early death, John had to struggle constantly to support his family and pay for his studies for the priesthood.  Despite the very limited education he had received as a child, he was ordained a priest at the age of twenty-six, after his marriage to a young woman from his village.

John was capable of drawing a great deal from the traditional spirituality of his time, which was based on personal prayer and the liturgy.  Readers of his Spiritual Diary, which he himself offered for publication, can still sense the depth of his spiritual life, which grew out of his attentive listening to Scripture in the liturgy and his familiarity with the writings of the Byzantine fathers. From the traditional sources of faith John drew the strength for long hours of pastoral work.  For fifty-three years he served his parishoners, cared for the poor, and carried out a full-time ministry as servant of the Word and servant of reconciliation.

By the end of his life, John was known, loved and sought by an impressive number of faithful.  He died on the morning of December 20, 1908 in the densely packed cathedral of Kronstadt, at the end of a liturgy during which he had tasted, as during so many other moments of his life, the joy of taking part in the communion of saints of heaven and earth.

LUTHERANS:
Basil, bishop and father of monks in Cappadocia; Wilhelm Löhe (d. 1872), restorer of the Lutheran Church in Bavaria

OLD CATHOLICS:
Basil the Great, bishop and doctor of the Church