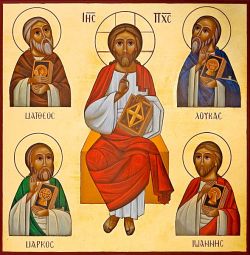 The icons of Bose, Coptic style - Christ and the Evangelists

Today the Eastern and Western churches celebrate the feast of Mark the Evangelist.
John, also called Mark, was the cousin of Barnabas, and it was at his mother's house that the first Christians gathered to pray, according to Luke's testimony in the Acts of the Apostles (12.12). Around the year 44, Mark accompanied Paul and Barnabas to Cyprus and Pamphylia on their first missionary journey. He later abandoned Paul, who sharply rebuked him for refusing to follow him. Later, Mark redeemed himself by remaining at Paul's side during his imprisonment in Rome. He was also a disciple of Peter, who calls Mark "my son" in his first letter, and he served as Peter's interpreter. At the request of the Christians of Rome, Mark wrote down Peter's preaching about what Jesus had said and done, and created the literary genre of the Gospel. According to some, Mark is the young man who ran away naked after Jesus' arrest.
The Coptic liturgy calls him "the witness of the sufferings of the only-begotten Son." In his Gospel, Mark fixes his gaze on the mystery of the suffering Servant in whom the Son of Man's glory is hidden, without ever hiding the failure of Jesus' own disciples to understand him during his lifetime.
The last years of Mark's life are partly shrouded in mystery. Eusebius reports that Mark went to Egypt, founded the church of Alexandria, and was martyred in Alexandria on an unknown date. According to tradition, Mark's body was transferred to Venice in 828. In 1968, Cardinal Urbani made a gift of one of his relics to the Pope of Alexandria, Cyril VI, a gesture that marked a renewal of dialogue between the Catholic and Coptic Churches after centuries of hostility and misunderstanding.