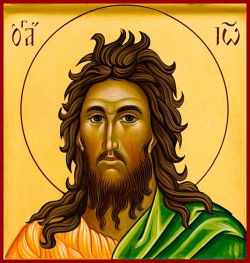 The icons of Bose, John the Baptist

The birth of John the Baptist prophet

Today the Eastern and Western churches celebrate the nativity of John the Baptist, the Lord's prophet and forerunner.
The son of the priest Zechariah and his wife Elizabeth, John is presented by Luke as the fruit of God's promise. He announces the messianic age in which the unfertile woman becomes the joyful mother of children and the tongue of the mute is loosened and breaks into prophetic praise. With John, prophecy is revived and God's call to conversion resounds with greater urgency.
In fulfillment of the angel's word, John came with the spirit and power of Elijah to prepare a people fit for the Lord. He lived in the desert until the day of his manifestation to Israel, and there, in silence, solitude, asceticism and prayer, he prepared himself for his mission.
The Baptist's birth, being particularly holy, is the only birth besides that of Jesus narrated in the New Testament. John is also the only saint whom the early Church commemorated with several different feasts during the year.
When the winter solstice was chosen in the fourth century as the date on which to celebrate Jesus' birth, the summer solstice was chosen as the date of John's birth as a way of respecting the Gospel account to the letter. The fact that days begin to shorten immediately after the summer solstice was seen by the Church fathers as a confirmation of John's words and the witness he bore to Christ: "He must increase, I must decrease."
Since John was an ascetic who lived in the desert, he quickly became a model for early monasticism. He has always been venerated with special love by monks, who in their asceticism, silence, prayer, and assiduous reading of Scripture seek to arrange everything so as to welcome God into their lives.

The annunciation, conception, sanctification and birth of John the Baptist are presented in parallel to the annunciation, birth and consecration of Jesus, and with these diptychs of the first and second chapters of his Gospel, with these events leading up to the stories of John and Jesus, Luke shows us that John was the forerunner of the Messiah even in his infancy... There is also the Gospel's silence with regard to both John and Jesus: John lives in the desert until the day of his manifestation to Israel, Jesus lives subject to Mary and Joseph in Nazareth. For both, there is hiddenness, growth to maturity, preparation for mission, for the dies ostensionis ad Israel.

(Enzo Bianchi, from Friends of the Lord).

Almighty and eternal God,
you willed that John the Baptist's extraordinary birth
help prepare a people fit for the Messiah:
grant that we may accept the Prophet's invitation to conversion,
and as we follow the example of his life,
which he consecrated to you
in solitude and prayer,
we will hasten the coming of the kingdom.
Through Christ our Lord.

ANGLICANS:
The birth of John the Baptist

WESTERN CATHOLICS:
The birth of John the Baptist

LUTHERANS:
The birth of John the Baptist

MARONITES:
The birth of John the Baptist

ORTHODOX CHRISTIANS AND GREEK CATHOLICS:
The birth of John the Baptist, the venerable and glorious Prophet and Forerunner
Niketa of Remesiana (4th cent.), bishop (Romanian Church)

OLD CATHOLICS:
The birth of John the Baptist