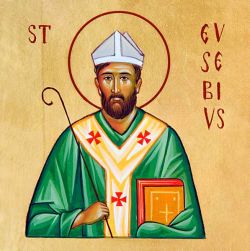 THE ICONS OF BOSE, Eusebius of Vercelli

Today the Eastern and Western churches commemorate Eusebius, a pastor who founded the local church of Piedmont, Italy.
Born in Sardinia at the beginning of the fourth century, Eusebius was educated in Rome, ordained a lector, and sent to Vercelli, near Turin, to care for that city's Christians. The locals soon asked him to become their bishop, and in 345 Pope Julius I made him the first bishop of the church of Vercelli, which at that time included much of the territory of Piedmont.
A wise, thoughtful man and an energetic orator who knew how to suit the word to the moment, Eusebius spread Christianity throughout subalpine northern Italy. Inspired by the emerging monastic tradition, he was the first Western pastor to introduce all of his collaborators in ministry to community life. The priests of his diocese lived together in a house in Vercelli, where Eusebius offered them the discipline of a daily life based on work, study and prayer. Many bishops of other northern Italian dioceses were trained in Eusebius' community.
Eusebius adamantly defended the decrees of the Nicene Council and the patriarch Athanasius of Alexandria, and he had the courage to face the emperor Constance and the Arians' anger. His resoluteness led to his exile, first in Palestine, and then in Cappadocia and the Thebaid. He came close to dying a violent death, and for this reason the Church has always remembered him as a martyr.
In 363, Eusebius returned to Vercelli and spent the rest of his life working with Ilarius of Poitiers to re-establish the apostolic faith in the churches of Piedmont and southern France.

Lord our God,
as we commemorate Eusebius,
the founder of our local church
and a defender of faith in Christ as man and God,
we pray:
enlighten and strengthen our pastors
so that we, attentive to their ministry,
may be guided along the path
of truth and holiness.
Through Christ our Lord.

In 166 BC, King Antiochus IV Epiphanes ordered the execution of the seven Maccabee brothers and their mother, shortly after the same fate had befallen the elderly scribe Eleazar, their tutor. With their death, the brothers gave witness to their faithfulness to God's Law and their hope in resurrection from the dead.
Christians as well as Jews admired these martyrs of Israel, whom they saw as predecessors of the first Christian martyrs.
Tradition has named Antioch as the site of the Maccabees' execution. The commemoration of their martyrdom spread quickly throughout the ancient world, and was already widely observed by the fourth century AD. According to both Eastern and Western calendars, the feast has always been celebrated on today's date.

OLD CATHOLICS:
The 7 Maccabee brothers and their mother, martyrs