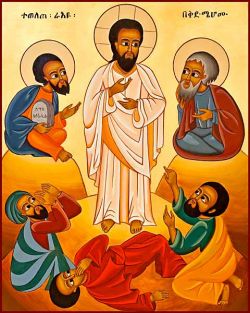 THE ICONS OF BOSE, Trasfiguration of Jesus

The feast of the Lord's Transfiguration is celebrated by all of the Eastern and Western churches on August 6.
The feast may have been introduced in the fourth-century Armenian Church to christianize a pagan festival dedicated to the goddess Aphrodite, but it more likely originated in or near Syria at the end of the following century. It was initially celebrated to commemorate the dedication of a church on Mount Tabor.
From the East, the feast soon spread to the Byzantine Church, where it became known as the "Metamorphosis of the Savior." In the West, the Transfiguration was first celebrated in Mozarabic Spain. Later, Peter the Venerable made it part of the monastery of Cluny's liturgy. From Cluny, the feast became known and loved throughout the Western monastic world, but it was only permanently incorporated into the Western Church's liturgy when the Roman Missal was published in 1570.
Today's feast recalls the biblical story in which Jesus is transfigured in front of Peter, James and John and shows them his glory as he converses with Moses and Elijah. On this occasion, the Church celebrates the fulfillment of the Scriptures - personified by Moses and Elijah - in Christ, and invites believers to discern the hidden power of the Lord's resurrection at work in the world. Christ's transfiguration reveals humanity's own vocation to divinization, and gives all of creation a glimpse of its awaiting destiny: communion with God in his Kingdom, which is now close at hand.
In the year 2000, the feast of the Transfiguration became a day of special intercession for Christian unity in response to the proposal of Bartholomew I, Ecumenical Patriarch of Constantinople.

God of light, on the day
of your Son's luminous Transfiguration
in the presence of his disciples,
you made Moses and Elijah appear,
and through them you affirmed the fulfillment of the Scriptures
and the continuity of faith:
allow us to contemplate this light
so that we ourselves may be transfigured
in the image of Christ Jesus,
who is blessed now and forever.

Today the Russian Orthodox church commemorates Boris and Gleb, "the holy Passion-bearers" (strastoterpcy).
The youngest sons of the first Christian prince of Rus', Vladimir, Boris and Gleb were assasinated in 1015 by order of their brother Svjatopolk, who had become Great Prince of Kiev and feared their rivalry.
Eight days after their father had died, Boris returned from a military expedition and learned of his brother's plot against his life. He decided not to offer resistence, remembering Christ's example and words and what the apostle John had written: "If anyone says, 'I love God,' but hates his brother, he is a liar." He spent an entire night in prayer, asking God to give him strength to face his coming passion, and at dawn on July 24, 1015 he was assassinated. Gleb also accepted death for Christ's sake and was killed on September 5 of the same year.
Their apparently useless sacrifice earned them honor, and they were named "holy Passion-bearers." In Russia, this title indicates a person whose radical commitment to the Gospel led him or her to repudiate violence, even in the face of death.
Boris and Gleb were the first saints to be canonized in Christian Russia, and they represent, in a symbolic way, the enormous impact of the first Christian conversions on the Russian mentality.

ANGLICANS:
Transfiguration of our Lord

LUTHERANS:
Transfiguration of Christ; The evangelicals of Salisburg (1731), witnesses to the faith

MARONITES:
Transfiguration of our Lord