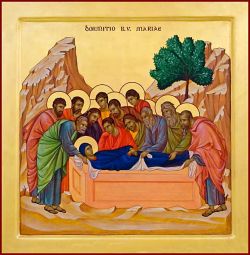 THE ICONS OF BOSE, The passing of the blessed virgin Mary

The passing of the blessed virgin Mary
In the middle of August, many Eastern and Western churches commemorate the passing to heaven of Mary, the mother of Jesus

The passing of the blessed virgin Mary

In the middle of August, many Eastern and Western churches commemorate the passing to heaven of Mary, the mother of Jesus.
This feast dates back to the first millennium. Several Armenian lectionaries found in Jerusalem attest to a celebration of Mary Theotókos held on August 15; this feast arose in the fifth century, probably after the Council of Ephesus in 431. A feast called the "dormition" (koímesis) of Mary was imposed on the entire Byzantine Empire by the emperor Mauritius at the end of the sixth century. It spread to the West a few decades later, and since the eighth century it has been known as the "assumption" (assumptio) of the blessed Virgin Mary.
The apocryphal Gospels tell of Mary dying with the apostles gathered around her, and of her later appearing to them as they celebrate the Lord's Supper. These stories, together with the fact that no certain relic of Mary's body has ever been found, strongly influenced popular tradition and religious iconography, and led the church to contemplate the last moments of Mary's life on earth in the light of Christ's victory over death.
Except for the Coptic Church, which commemorates the Virgin's death and assumption on two different days, the Christian churches did not formulate teachings about Mary's death in the early centuries. In the Catholic Church, on November 1, 1950, the tradition according to which Mary was raised body and soul to the glory of heaven was proclaimed a dogma. Other churches, which do not not feel the need for a similar dogmatic definition, still celebrate the passing to heaven of Christ's mother as a way of expressing their hope that the resurrection of the body will become an eschatological reality for every human being. This future glory is prophetically anticipated in the earthly parable of the woman who is a figure of the heavenly Jerusalem.

Lord our God,
today heaven, earth and all creatures
rejoice because of the Virgin Mary,
the Lord's mother:
lift our entire existence,
mind, body and spirit,
into the glory of the Resurrection
in Jesus Christ, our only Lord.

In 1552 Basil, a fool-for-Christ, died in Moscow.
Vasily Blazenny (the "Blessed One") was born in 1464 in Elokhov, near Moscow. The man who was to become Russia's most beloved fool-for-Christ lived as a vagabond, wandering the city streets naked and fearlessly performing incomprehensible acts. He destroyed goods on display at the market as a way of punishing dishonest merchants, and embraced the walls of houses in which God-fearing individuals resided. More than once, he reproved Tzar Ivan the Terrible for the unjust schemes the ruler plotted in his heart and often carried out.
Basil is the most eloquent example of what became the exclusive prerogative of Russia's fools-for-Christ, beginning in the sixteenth century: the right to chastise the powerful.
At his death he was immediately venerated and loved, so much so that the church in the Red Square, next to the Cremlin, was dedicated to him.

ORTHODOX CHRISTIANS AND GREEK CATHOLICS:
Dormition of our Lady the most holy Mother of God and ever virgin Mary
Basil the Fool (Russian Church)