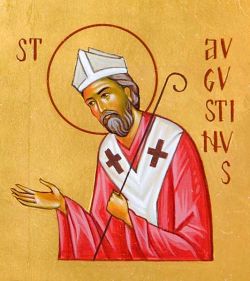 THE ICONS OF BOSE, Augustine of Hippo

In 430 Augustine, a pastor of Hippo and one of the best loved fathers of the Western Church, died during a Vandal invasion of his city.

Born in Tagaste, Africa in 354, Augustine had a passionate temperament and spent many years seeking to satisfy his desire to know and love.
In Carthage as a young adult, he gradually abandoned his esthetic hedonism as he began to inquire deeply into the nature of evil, which in his judgment dwells in the depths of the human heart. After following the teachings of Manicheism for nine years, Augustine fell into despair and left Africa for Italy. In Milan he heard the preaching of St. Ambrose, and began to see his life in a new light. Guided by the philosophy of Plotinus and encouraged by the company of his mother Monica and his friend Alipius, Augustine let himself be seduced by the beauty of Christian life.
He was baptized in Milan on Easter night of the year 387, and soon returned to Tagaste, where he underwent a profound conversion. After selling all of his belongings and giving the proceeds to the poor, he moved to the outskirts of the city. There he and the friends who had remained faithful to him founded a cenobitic community, and devoted themselves to living in radical faithfulness to the Gospel.
Augustine was ordained to the priesthood and later became bishop of Hippo, but he never stopped cultivating the monastic project he had begun. A group of priests and deacons gathered around him, and Augustine gave them a rule for community living, perhaps the same rule he had written for his first community in Tagaste. He continued to dedicate much of his time to loving study of Scripture and to preaching, and fought against every reductive interpretation of the Christian message.
Augustine was one of the most brilliant of all Christian thinkers, and a true poet of the inner life. He spent his last years with his heart and mind immersed in the one desire to penetrate ever further into God's mystery and that of humanity.

Lord our God,
you called Augustine from the darkness of sin
and made him a pastor filled with the Holy Spirit:
grant that we too may seek you ardently,
find rest in you,
and sing of your love and your beauty
in our journey towards your Kingdom,
blessed now and forever.

ANGLICANS:
Augustine, bishop of Hippo, teacher of the faith

WESTERN CATHOLICS:
Augustine, bishop and doctor of the church

LUTHERANS:
Augustine, doctor of the church in North Africa

OLD CATHOLICS:
Augustine, bishop and doctor of the church