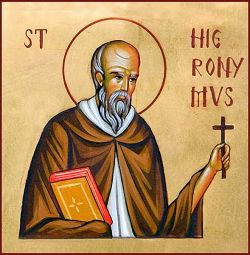 THE ICONS OF BOSE, Saint Jerome

Jerome, a monk and Church father, died in Bethlehem in the year 420.
Born in Dalmatia between the years 340 and 350, Jerome went to Rome to study the Latin classics. In the capital of the Empire, he discovered the Western Church's ascetic tradition, and he then travelled to the East to experience monastic life in the desert of Syria. In Antioch, the bishop Paulinus ordained him a priest, against his wishes.
Upon returning to Rome, Jerome opened a house for prayer on the Aventine. It became a gathering place for women of the Roman aristocracy, three of whom, Marcella, Paola and Eustochio, accompanied Jerome to Palestine in 385. While in Rome, Jerome came to love Scripture, and for the rest of his life this love never left him.
He had a passionate temperament and made close friends, such as Rufinus of Aquileia, who became equally fierce rivals when disagreements arose on matters of principle.
After the death of Pope Damasus, Jerome, disappointed by many of those who had formerly been his closest companions, left everything and returned to the East. This time he headed for Bethlehem, where he founded a monastery for men and another for women, and began to translate and comment upon each book of Scripture. It is to him that we owe the Vulgate, the Latin Bible that was adopted by the entire Western Church.
Not even in monastic solitude did Jerome find peace: because of his unparalled expertise in biblical matters, he was called upon to take part in the great theological controversies of the time.
In his writings, and especially in the vast collection of his letters, Jerome left the Church a monumental treasury of teachings and intuitions on the Christian life and monastic asceticism. He is rightly remembered as one of the greatest doctors of the undivided Church.

Lord our God,
you taught Jerome
to inquire with wisdom into Holy Scripture
and to taste its sweetness:
teach us, like him, to
listen to, meditate and contemplate
your word, because it is our daily nourishment
in our pilgrimage towards the kingdom.
Through Christ our only Lord.

On the thirtieth of September, early Eastern and Western calendars commemorate Gregory the Enlightener, an apostle of the Armenians.
Gregory was the son of Anak, a Parthian prince, and was born in Armenia, where his father had settled in the mid-third century. His parents, who had taken part in the Sassanian king Artaserse's plot to eliminate Cosroe, King of Armenia, were killed by Cosroe's sons. Gregory escaped death by fleeing to Caesarea of Cappadocia. He was baptized a Christian, married, and joined the court of King Tiridate, one of Cosroe's sons. Because he was a Christian and the son of Anak, he was persecuted harshly and eventually imprisoned at Artaxata for fifteen years, from 298 to 313.
According to the earliest hagiographic accounts, Gregory healed King Tiridate of a serious illness, and the king converted to Christianity. For this reason, Gregory is credited with the conversion of a large part of Armenia's population to the Christian faith.
As far as historical evidence is concerned, it is certain that Gregory, once he regained his freedom, was ordained bishop of Cesarea in 314 by bishop Leonzid. With the help of the Cappadocian churches, he thoroughly reformed Armenian Christian life, preaching the Gospel in those territories where it had not yet been heard.
According to tradition, he died alone in a cave near the village of Thordan. Armenians commemorate him on three different days, remembering in turn the beginning of his imprisonment, his release from prison, and the finding of his mortal remains.

ANGLICANS:
Jerome, translator of the Scriptures, teacher of the faith

WESTERN CATHOLICS:
Jerome, priest and doctor of the church