Cardinal Roger Etchegaray and Metropolit Emilianos Timiadis’s return among us

Metr. Emilianos Timiadis, Card. Roger Etchegaray and the Prior of Bose, Enzo Bianchi

In the last few days of the year, our communion was visited by God’s blessing with Card. Roger Etchegaray and Metr. Emilianos Timiadis’s return. Listening another time to the voice of these “fathers”, we understood how the fathers of the Church in the early centuries were, and, at the same time, they made us feel near to them, familiar, alive among us, able to free unpredictable treasures of evangelical wisdom. 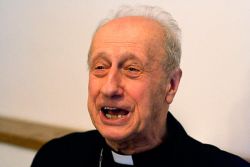 Roger Etchegaray, born in 1922 in a family with Basque origins, in 1969 was appointed Auxiliary Bishop of Paris and the following year became Archbishop of Marseille. Created Cardinal by John Paul II in 1979, he was called in Rome in order to preside over the Pontifical Council "Iustitia et Pax” and “Cor Unum”: as a President he carried out a persistent ministry of peace and evangelical solidarity in all continents. In 1994 he was nominated as President of the Central Committee of the Holy Year 2000. Because of the delicacy of his entrusted tasks he was called Cardinal Mission-Impossible. 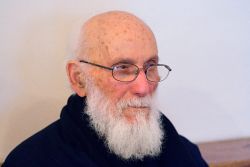 Emilianos Timiadis (1916), Metropolitan of Sylivria, was observer at the II Vatican Council and, for twenty-five years, he was representative of Costantinople’s Ecumenical Patriarchate to the World Council of Churches in Geneva, as well as member of many dialogue committees. He is credited unanimously as one of the protagonist of “the Ecumenical movement”, an untiring weaver of relationships among Churches. Since 1995 he divides his time between the Monastery of Bose and the Diocese of Eghion in Greece.

Our publisher Qiqajon published the following books in the “Spirituals” series: