Visits to Monasteries and Study Trips 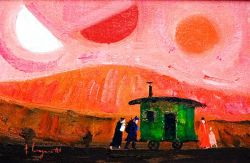 In January and February various brothers and sisters spent a period in monasteries outside Italy to strengthen the bonds of friendship we have with other communities, to know more intimately monastic life in traditional monasteries, and to learn better foreign languages.

Several sisters stayed for a month in French monasteries: sr Lara at Echourgnac, sr Michela at Rivet, sr Beatrice at Blauvac, sr Barbara at Pradines. Br Matteo was for a month a guest at the Benedictine monastery of St Ottilien in Munich, to improve his German and to share a common interest in the Church in China, while br Luigi spent a month in Athens as guest of the Orthodox monastery of Petraki for a course in modern Greek. To take a course in English sr Laure spent a month and a half in Oxford; sr Sylvie was also in Oxford, to visit several Anglican communities. Sr Roberta stayed for ten days with the community in Grandchamp, Switzerland, where sr Lisa later preached a series of spiritual exercises.
As in other years, br Luciano and sr Donata participated in the meeting of novice directors of Eastern France, which this year was held at Lérins on the theme “Commitment to the Monastic Life through Vows in the Twenty-First Century”. In the same period br Michele R. took a course in wheel-turning at the school for ceramicists that several other brothers attended recently and during his stay there he was also able to spend a few days in Taizé.