Meeting of the Work Group on the “Ecumenical Martyrology” 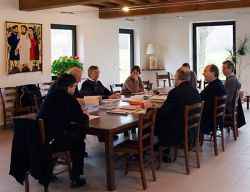 Attendants to the meeting

In mid-February the ecumenical group that is working on a possible shared understanding and remembrance of martyrs and witnesses to the faith belonging to different Christian confessions met in Bose.

This is an initiative of our community, undertaken after the publication of Il libro dei testimoni, an ecumenical martyrology, which has been accepted by the Faith and Order department of the World Council of Churches. Among the participants of this encounter we wish to mention: pastor Lukas Vischer of the Reform, the Orthodox theologian Tamara Grdzelidze, canon Jeremy Haselock of the Church of England, Helmut Harder of the Mormon Church, and father Johan Bonny of the Pontifical Council for Christian Unity. At the conclusion of the meeting it was proposed to organize an international conference, to be held in Bose on the feast of All Saints 2008, which will deal with the topic of the commemoration of saints in the various Churches.