Br Edoardo has passed from this world to the Father 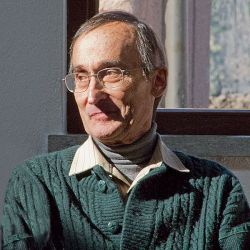 Edoardo was born in Monticello Brianza on 18 February 1943, where his family Arborio Mella Bazzero Mattei had found a safer residence than Milan during the war period. After his studies at the Institute Leone XIII of Milan, he obtained a laurea in modern literature at the Catholic University of Milan with a thesis on “Milanese in France between 1796 and 1814”.

Following a suggestion of Taizé, he went to Turin to meet Enzo Bianchi in 1965 and in 1967 visited Enzo in Bose. In the fall of 1969 he decided to join the common life that had begun in Bose and on 30November of that year was received liturgically into the community. The life of extreme poverty of the Community in those first years, so different from the comforts he had known in his family, found him in the humblest services. The attention in doing his best to render the common spaces decent and welcoming with a simple touch of beauty, his daily care in ringing the bell for awakening and for the offices, his ever-new wonder at observing nature and the woods around make him an authentic amator loci.

On 22 April 1973, Easter Sunday, at dawn he was among the fist seven brothers who, after having approved the rule of Bose, emitted their definitive monastic profession. In the meanwhile, from the fall of 1971 he had begun to teach Italian, history, and geography in the middle schools of Zubiena and then in Mongrando; he continued this work until 1982, gaining the respect of his colleagues and, even more, the affection and gratitude of many students. From 1973 to 1984 he was vice-prior, carrying out with discretion and sensitivity the ministry of collaborator for the unity of the Community. From 1983 on he utilized his studies of the classics to dedicate himself to Latin medieval patrology, translating and editing various works, in particular William of Saint Thierry, for the Editions Qiqajon, which then began to be published.

In the fall of 1990 he welcomed gladly the decision of the Community to send him stably to the Jerusalem Fraternity where, together with Daniel and Alberto, he passed eighteen years, weaving fraternal relations in that fascinating and complex reality and working as a librarian at the Pontifical Biblical Institute. The land of Israel soon became for him a place to love and be loved, in spite of its asperity. He returned to Bose in the fall of 2008, once again working with the Editions Qiqajon, translating spiritual writings from French and English and helping to run the library.

After the first vespers for Epiphany this he suddenly felt unwell in the library; this was the prelude to a much graver diagnosis. In the last months of his life his proverbial refusal of any sign in his regard that might seem a privilege gave way to a serene and grateful docility. The fraternal feast for his 70th birthday, for his “twin” Daniel, and for Enzo found him serene and peaceful. His wonder and joy at the church events of his spring — the election of pope Francis and his first words and actions, the visits to Bose of patriarch Bartholomew of Constantinople and of the Coptic patriarch Tawadros, as also the closeness and affection of the brothers and sisters gave joy to the days of his progressive decline.

The eucharist sustained him regularly during his last days, as also the anointing of the sick, which he received with grateful serenity on Sunday, 9 June.

He passed away peacefully a little before 6:00 A.M. on Tuesday, 25 June, surrounded by some brothers in prayer, while the bells called the community to morning lauds.

We ask for br Edoardo the intercession of all those who have known and loved him, while we give thanks to God for the gift that he represents.

The funeral liturgy will be celebrated on Wednesday, 26 June, at 11:00 A.M. in the church of the community.

Br Enzo, prior of Bose
???with the brothers and sisters of the community