The death and the last days of Bishop Emilianos of Silyvria 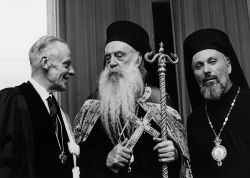 On Friday 22 February at dawn Metropolitan Emilianos (Timiadis) of Silyvria, Bishop of the Ecumenical Patriarchate of Constantinople, passed away from this world to the Father. After his last stay at Bose, where he chose to live as brother among the brothers in the community since October 1995, he was in his last days at Eghion, Greece, where he was a guest of Bishop Amvrosios, Metropolitan of Kalavrita, his spiritual son.

On 10 March he would have been 92 years old. Until his last hours he was always peaceful and thankful for the love he was given by people around him. He often repeated to our community: "You are in my heart, you are a portion of my being. I embrace you all. Thank you!". 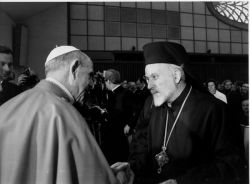 During his last stay at Bose (20 December 2007 - 30 January 2008) he did not cease to share with each of us his great wisdom, his witty intelligence, his deep knowledge of spiritual fighting and discernment, and above all his love for Christ, the Church, and all mankind.

To everyone who visited him during his last weeks he addressed a personal word of exhortation, encouragement, and consolation. After having talked with him, George Lemopoulos said: "He returns to God in the fullness of love, surrounded by all his spiritual sons.” 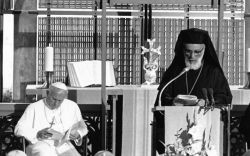 “Efcharistò! Mille, mille, mille merci!”… these are the words he incessantly repeated during his exodus, together with a solemn but simple and true sign of the cross. “I leave: see you in God's kingdom.”

The Prior Fr Enzo Bianchi and the community of Bose praise the Lord in silence and give thanks to Him in this time following the death of this man of God, a death which is an invocation for the unity of all the Christians. In our prayer we ask God to continue to send prophets to his community, and we pray our beloved Father Emilianos to intercede with God in Heaven for all the children of God.

We publish the "Laudatio delivered by the Prior of Bose in occasion of the awarding of the prize "St Nicholas" to Metropolitan Emilianos (text only in Italian).

published by Edizioni Qiqajon, the publishing house of the community of Bose.