The death of His Holiness Patriarch Ignatius IV Hazim 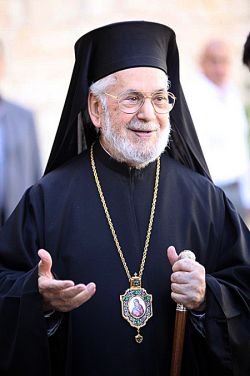 Patriarch Ignatius IV Hazim
Bose, Wednesday 5 December 2012
It is impossible to summarize in a few lines what was dear to the heart of a man like Patriarch Ignatius, who lived a long and intense life, but there is one word that came often to his lips

Another pneumatophore, whose wise paternity, sincere friendship, and great passion for Christian unity and for dialogue among men we had experienced and appreciated more than on one occasion, this morning returned to the Father’s house, full of years, but also shattered by the enormous sufferings that the people of his Syria continue to suffer.

His Holiness Ignatius IV, Greek-Orthodox patriarch of Antioch and all the East, to whom all Churches are in debt for is teaching and his ecumenical courage, granted us the gift of his visit to Bose in 2001. We already knew the depth of his Christian thought, contained in his writings, and it is for this that we had invited him to visit us. That meeting, however, revealed to us also his profound humanity, sincere and affectionate, and his passion for dialogue.

From this was born a friendship that grew with the years, thanks to constant contacts and reciprocal visits. Enzo and other brothers have been his guests in the patriarchal residence of Damascus and at the Theological Faculty of Balamand, and the Patriarch continued to send us signs of his affection, in particular on the occasion of our ecumenical conferences, at which his messages and also various members of his Church have always enriched our encounter with the “Antiochene” church tradition of which the Patriarch was and remains one of the major heirs and inspirers.

A man capable of profound friendships, but at the same time discreet, Patriarch Ignatius gave in to our insistence and agreed to answer our questions about his long and rich experience of a Christian in dialogue and of a patriarch of a Church always expert in diversity. The fruit of those conversations, realized by some of our brothers and sisters, became a book-interview (Ignazio IV, Un amore senza finzioni, Qiqajon 2006), a real look at his life and his passion for God and for men.