Annual meeting of the Italian MID

Fonte Avellana (PU)
27 November 2013
The Italian group of the Monastic Interreligious Dialogue (MID/DIM) held its annual meeting, this year at the monastery of Fonte Avellana 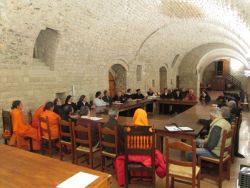 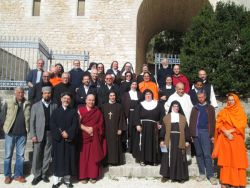 On 22–24 October the Italian group of the Monastic Interreligious Dialogue (MID/DIM) held its annual meeting, this year at the monastery of Fonte Avellana. The remote situation of the ancient Camaldolese monastery in the Apennines of Umbria-Marche id not discourage participation, which in fact was greater than last year. The participants numbered thirty-three, two thirds of them Christian monks and nuns (Benedictine, Cistercian, Trappist, Olivetan, Camaldolese, Bose, Poor Clares, and Capuchin nuns) and one-third Hindu, Buddhist (Tibetan and Zen) and Taoist. Present were also an imam of a Sufi Muslim fraternity and a professor expert in inter-cultural and interreligious dialogue. This year the group was especially honored by the presence of fr William Skudlarek, an American Benedictine living in the Fujimi priory in Japan and secretary-general of MID/DIM, and of fr Indunil Janakaratne, under-secretary of the Pontifical Council for Interreligious Dialogue, responsible for relations with Buddhism.

The warm and attentive hospitality of the Fonte Avellana monastic community, thanks especially to the organization contribution of br Cesare Bovineli, one of its monks and a member of MID/DIM, permitted the meeting to be held in a climate of true fraternal friendship and of profound spiritual communion. The prior of Fonte Avellana, dom Gianni Giacomelli, in his words of greeting manifested his and his community’s sensitiveness for interreligious dialogue in the conviction that, as he said, “our interreligiosity is an inter-humanity” and that an inter-monastic meeting “has a prophetic meaning in the world in which we live”.