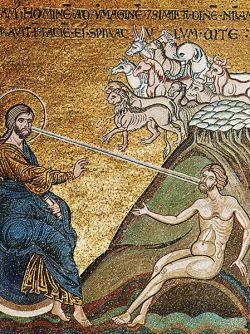 The creation of Adam
Bose, 5-8 September 2012
Man — Custodian of Creation
XX International Ecumenical Conference
in collaboration with the Orthodox Churches

in collaboration with the Orthodox Churches

According to the Bible, God in his Word created the universe and saw that his creation was good; he formed man according to his image and likeness and saw that it was “very good” (Gen 1,31). Man’s fall disturbs also the harmony of creation and human relations. The Bible lifts the veil on the mystery of visible creation in placing it in relation to salvation history, when with Paul it affirms that the world groans in labor pangs awaiting final salvation (cf. Rom 8, 22). The incarnation of the Son, his cross, his resurrection, and the gift of the Holy Spirit restore wounded man and the universe; the new humanity in Jesus Christ, with the free obedience of faith, can thus fulfill God’s plan of salvation and responsibly govern the creation that was entrusted to it.

The 20th International ecumenical conference on Orthodox spirituality hopes to examine more closely this fundamental tie between creation and salvation by interrogating and being interrogated by the various Orthodox traditions.

With great discernment the Orthodox Churches have been able to arouse awareness that man’s responsibility for all creation is inscribed in God’s commandment. Patriarch Bartholomew I of Constantinople, following an intuition of his predecessor Demetrios, from the beginning of his patriarchate has forcefully promoted initiatives for the safeguarding of creation and has emphasized the spiritual and Christian dimension of ecological commitment.

Although ecology is a recent science, its spiritual foundations have ancient roots. Creation is a book that recounts Gods glory and mercy. The fathers meditated on the Biblical account of creation, but also dealt with the scandal of evil and of suffering and contrasted divine providence to astrological fatality. Maximus the Confessor in the seventh century examined man’s vocation within creation and his renewed vocation in Christ. The spiritual tradition, thus, has been able, through the purification of the heart, to discern the traces of the Creator Word in the natural world, to the point of contemplating the world immersed in divine light.