Monastic hospitality and reconciliation between the Churches 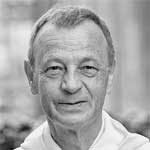 Alois Löser is the prior of the Monastic community of Taizé since 2005. He was born in 1954 in Bavaria. He entered the Taizé community in 1974; there he has devoted much of his time to listening to and accompanying young people. Before the fall of the Berlin wall, Brother Alois made numerous journeys in Central Europe to support the Christians there, then under communist regimes. Over the years, he has coordinated the organization of international meetings at Taizé and the European meetings held in several of the continent’s major cities. Being interested in music and liturgy, he prepared for publication the new Taizé book of prayers: “Prayer for Each Day” and has composed a number of the songs of Taizé. As prior of the community, brother Alois carries out this ministry at Taizé and in visiting the brothers living in small groups in Brazil, Bangladesh, Korea, Senegal, and Kenya. He regularly visits Church leaders: Pope Benedict, Patriarch Bartholomew of Constantinople and Patriarch Kirill of Moscow. “Through these visits, – he says – I would like to show that, with the brothers, we passionately seek communion between Christians. In Taizé we want to contribute to giving greater visibility to the communion which, in Christ, already exists between all who are baptized.”