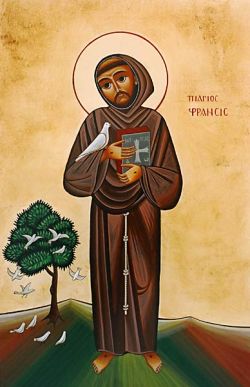 THE ICONS OF BOSE, Francis of Assisi

Francis of Assisi, the founder of the Order of Friars Minor, died at the Porziuncola chapel on the evening of October 3, 1226.
Francis was born in Assisi in 1182 into a family of the emerging borghesia. After a comfortable adolescence in which he was fascinated by chivalric ideals, he underwent an abrupt conversion in mysterious circumstances, and began to seek a life of solitude, prayer and service to leprosy victims and the poor.
A small group of brothers joined him, and Francis came to understand that only in mutual submission, poverty of heart and concrete material austerity would it be possible for them to follow in the footsteps of Christ, who had left his riches and had become poor out of love for humanity.
Francis' radical attachment to the Gospel had an enormous resonance in the church of his time. There was a desperate need for witnesses capable of leading the church back to the paths on which Jesus had walked. In just a few years, the Friars Minor numbered in the thousands, and Francis was obliged to give them a rule approved by Church authorities. His own desire to remain unfettered in his extremely personal vocation led him to name a successor in the last years of his life, who continued to guide the Order Francis had founded.
Francis's uncompromising faithfulness to the Gospel, his love for personal and communal poverty, his obedience to all creatures, and the peace he found nowhere but in trust in God's infinite mercy have made him a constant, universal appeal addressed to the Church in all times and places. His holiness is recognized far beyond the churches of the West, as icons of him in many Orthodox churches attest.
Francis died at the young age of forty-four, naked and immersed in the creaturely peace he had always loved and celebrated in his songs of praise to God.

Almighty God,
you called Francis
to a life of poverty and humility
and formed him in the image of Jesus crucified:
grant that we may follow his example
in the freedom of God's children,
in the joy of the simple of heart,
in wonder and gratitude for all of your creatures.
Through Christ our only Lord.

COPTS AND ETHIOPIANS (24 tut/maskaram):
Quadratus (1st cent.), one of the 72 disciples (Coptic Church)