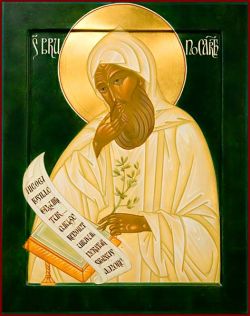 THE ICONS OF BOSE, Bruno the Carthusian

In 1101 Bruno, the founder of the Carthusian Order, died at Serra hermitage in Calabria, Italy.
Born in Cologne around the year 1030, he studied at the famous cathedral school of Rheims and graduated with the title of scholasticus, or master of theology, at a very young age.
After he had begun to write a commentary on the Psalms and another on the Pauline epistles, Bruno spent several unhappy years in the service of the bishop Manasse, who was a notorious practitioner of simony. Increasingly disgusted by the Church's worldliness, Bruno refused to become archbishop of Rheims when Manasse was deposed. He began instead to think about what sort of lifestyle would allow him to seek God in solitude and silence, as he desired.
After living for some time near the monastery of Molesme, he decided to seek greater seclusion near Grenoble on the Massif Chartreuse, from which the Carthusian order took its name. There Bruno created a community with a strongly eremitic lifestyle.
Summoned by Pope Urban II, his former disciple, Bruno had to leave his companions and travel to Rome in the Pope's service. But he could not tolerate the quarrels between the papacy and the empire, and decided to withdraw once and for all to Italy's Calabria region, where he founded the hermitage of Serra.
Here Bruno, a man of inner vigilance, ardent desire and love for the Lord, was able to devote himself to listening to God's word and waiting in prayer for the coming of his Kingdom. It is prayer, according to Bruno, that allows us to become fully human as we struggle silently in our hearts, day after day.

Lord our God,
you called Bruno to listen to your word
in solitude and silence:
help us remain in profound communion with you
in our daily life,
resisting all distractions,
and allow us to find joy in our solitude.
Through Christ our only Lord.

On October 6, 1536 William Tyndale, the first translator of the Bible into English, was strangled and burned in the courtyard of Vilvoorde Castle in Belgium.
William was born around the year 1494 in Gloucestershire. He studied at Oxford and Cambridge, where he encountered the ideas of the English reformers John Wycliff and the Lollards. Concerned when he learned that many members of the clergy of his time were almost completely unfamiliar with Scripture, Tyndale decided to undertake a complete translation of the Bible into English, using Erasmus' edition of the Greek New Testament as an aid.
When he turned to the bishop of London to seek support for his project, he was strongly discouraged from beginning it. Bitterly disappointed, Tyndale decided to leave his country permanently.
He settled in Hamburg and went to work. Before long, he sent the first copies of his translations to England. Harrassed repeatedly because of his sympathies with the Reformation movement, among other reasons, Tyndale was eventually arrested and publicly accused of heresy in 1535. He was sentenced to death and executed without a trial.
Paradoxically, his translation of the Bible, which had aroused such fury on the part of civil and Church authorities, became the basis of the Authorized Version or King James Bible, the best loved and most widely read English version of the Bible in existence.

ANGLICANS:
William Tyndale, transaltor of the Scriptures, martyr of the Reformation

COPTS AND ETHIOPIANS (26 tut/maskarani):
Conception of John the Baptist by Elisabeth (Coptic Church)