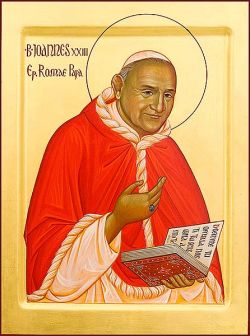 THE ICONS OF BOSE, John XXIII, Pope of the Church of Rome

Angelo Roncalli, who became Pope John XXIII in 1958, died in Rome on June 3, 1963 at the age of eighty-two.
He was born in the countryside near Bergamo, Italy, and learned from his large, poor peasant family to recognize a blessing from God in poverty. The simple but solid education he received confirmed him in his faith, and during his seminary years he developed several intuitions that were to make him a prophetic figure for all of the churches.
Chosen by his superiors for a diplomatic career, he became apostolic nuncio in Bulgaria, and then in Instanbul and Paris. Everywhere he went, he worked for reconciliation among Christians, respectfully drawing forth the treasures contained in each church's tradition. In Turkey, Roncalli also had the chance to ask himself what the presence of the church could mean in a non-Christian world.
Elected Patriarch of Venice in 1953, he was able, in his rediscovered pastoral role, to bring his vision of the Church into focus: it was a vision of a Church called to be poor, to listen to the Gospel, to wash people's feet, and to be merciful, because it was God's mercy that had brought the Church into being.
On October 28, 1958, Roncalli was elected bishop of Rome, to the surprise of many. Judged a 'transitional' Pope, John XXIII instead revealed the mature fruit of his pastoral intuition. In January 1959 he announced the convocation of an ecumenical council, declaring his hope that a new Pentecost would be granted to the entire assembly of believers in Christ.
Pope John succeeded in opening the Second Vatican Council on October 11, 1962, and in conveying to the council fathers, with his customary discretion and discernment, the need for openness to the breath of the Spirit. He died the following year in the serenity of the poor in spirit, without seeing the results of his work. All of the world's nations and peoples were left with extraordinary memories, especially those who had recognized in him the heart of a shepherd.

God of love,
today we remember John XXIII,
a bishop and Pope of your Church:
in him you gave us the gifts of
ardent passion for Christian unity
and for peace on earth,
the goodness and wisdom of a true pastor,
humble simplicity and prophetic audacity.
Grant that in our journey to meet you
we may show all those whom we meet
your love for them
in Jesus Christ, our only Lord.

MARONITES:
Philipp, deacon (1st cent.)
Commemoration of the fathers of the 7th ecumenical council, the 2nd of Nicea (787)