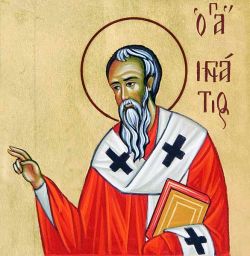 THE ICONS OF BOSE, Ignatius of Antioch

Today the Eastern churches commemorate Ignatius, called the Theophore (God-bearer). He was Peter's second successor as bishop of Antioch, and was martyred around the year 115.
All that we know about Ignatius' life is his final journey towards martyrdom. In his great faith he transformed this voyage into a journey of discipleship, following Christ who, although crucified, was victorious over evil and death.
Ignatius was sent to Rome to be thrown to the lions, and at each stop in his voyage he was greeted with affection and respect by Christians. Until the end, he continued to send them encouragement in letters that are among the most beautiful exhortations of faithfulness to the Gospel in all of Christian literature.
Profoundly convinced that Christ was fully human and divine, Ignatius strenuously defended the reality of the Word's Incarnation and bore witness to the Resurrection with his own martyrdom, which he accepted in total freedom and with vibrant love.
When he learned that the Christians of Rome were trying to save him from death, thus preventing him from answering the inner voice that urged him to return to the Father, Iganatius wrote them an ardent letter testifying his desire to imitate the passion of his God, and to be ground like grain by the beasts so as to become Christ's pure bread.
Ignatius was filled with loving concern for the unity of the Church. For him, this unity finds its sacrament in the Eucharist, Christ's true flesh, and is structured around the bishop, who is called to work together with his collaborators, the priests, so as to gather the flock of the faithful into the one Church of Christ.
The Western churches celebrate Ignatius' memorial on October 17.

Lord God, Father of the church,
you gave us Ignatius,
an imitator of your Son's passion,
who wanted to be ground like grain and
become Christ's pure bread:
allow us to find refuge in the Gospel
as in the body of Jesus,
and grant that that we may love enough to give our lives
and so be led to you, O Father,
who are blessed now and forever.

On the seventh day of the month of Babah, the Coptic Church commemorates the monk Paul of Tamma, "who took his life seven times for love of God."
A native of Tamma, in the province of Asyut, Egypt, Paul spent much of his life as a hermit on the mountain of Al-Asmunayn, together with a disciple named Ezekiel who became his biographer. The Lives of the desert fathers tell of Paul's many travels, during which he met the most famous monks of the region.
What is striking in the traditional stories about Paul of Tamma is that his desire to be with the Lord was such that he took his life six times for love of Christ, and each time he received his life again from Christ. At the end of these repeated "follies," writes his biographer, Paul wanted to follow in Christ's footsteps by dying for sinners, but the Lord told him that he had already given more than sufficient proof of his love.
The modern versions of the Coptic Sinaxarion have eliminated these accounts of Paul of Tamma's life, perhaps because they are inexplicable and tend to scandalize readers. Yet Paul's highly unusual tale hides the conviction that true communion between God and a human being can be reached only when each lays down his life again and again for love of the other.
Paul died on the seventh day of Babah in an unknown year. He is buried in the monastery of Anba Bishoi next to his close friend Bishoi of Scetis, who became his inseparable companion in death as he had been in life.

When you are in your cell, my child, do not be like the hypocrites. Do not exhaust yourself in prayer, and you will be heard. When you are in pain, wait for rest.

LUTHERANS:
Ignatius, bishop and martyr in Asia Minor
Nicholas Ridlev (d. 1555), bishop and witness to the bloodshed in England