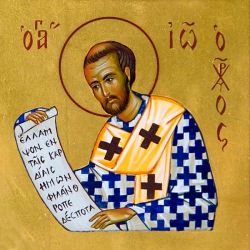 In the year 407, the Church father and pastor John Chrysostom died in exile.
Born in Antioch around 347, he was baptized as an adult and joined the Antiochene clergy as a lector. He entered a cenobitic monastery, but left after only four years in search of greater solitude. His health did not allow him to persevere in this intention, and he accepted the invitation to return to the city and become his bishop's close collaborator. For the next twelve years John, whose eloquence had earned him the nickname Chrysostom or "golden mouth," preached constantly. In his homelies he denounced the clergy's faults and abuses of power, and defended the poor, condemning social injustice in all its forms.
In 397 he was elected Patriarch of Constantinople, and he immediately began to reinvigorate the spiritual life of the diocese by reforming its clergy and its monastic communities. He also founded hospitals, and worked to relieve the suffering of the poorest members of the population.
Since he did not spare the rich and the powerful in his ardent preaching, John was deposed from his episcopal ministry and exiled. After a short time he was summoned back to Constantinople and resumed his pastoral activity, but only for two months. Arrested as he celebrated the Easter liturgy, he was again exiled.
Exhausted by his forced march into exile, Chrysostom died on September 14, 407, far from the flock he loved. His feast is anticipated by a day in the West and postponed to November 13 in the East, in order to avoid an overlap with the Exaltation of the Cross.

Lord God,
who are the strength of those who hope in you,
you gave John Crysostom a forceful message,
persuasiveness in announcing your Gospel,
and great courage under persecution:
grant that we, like him, may be worthy and steadfast
announcers of Jesus Christ,
your Son and our Lord.