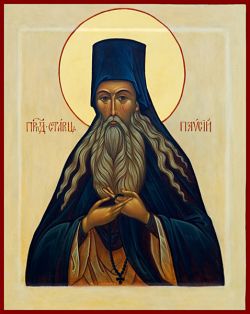 Today the Orthodox churches commemorate the starets Paisius Velichkovsky, who was a spiritual father to many generations of monks.
Paisius was born in 1722 in Poltava, Ukraine. In search of a serious spiritual life, he entered the theological academy of Kiev, but was disappointed by the school's reliance on Western theological methods and its lack of rootedness in the patristic tradition. At the age of twenty-four, Paisius left the Ukraine for Mount Athos.
A kind, gentle man and a true seeker of wisdom who used the scientific methods of his time to explore the thought of the Church fathers, Paisius soon attracted a large group of Romanian and Slavic monks. He began to organize cenobitic communities in Moldavia, where daily life was structured around a dual center: the practice of the Jesus prayer, which Paisius had learned on Mount Athos, and the study of the fathers.
Through the efforts of Paisius and his companions, many patristic works were translated into Romanian and Slavonic for the first time. It is to Paisius that we owe the Slavonic edition of the Philokalia, the anthology of Eastern patristic writings on the subject of the prayer of the heart, compiled by Nicodemus of Mt. Athos.
Because of Paisius' discernment, and the fact that he welcomed an enormous number of disciples from different nationalities and taught them to seek reconciliation in their daily lives, he strongly influenced the spiritual lives of many generations of Christians and monks.
He died on November 15, 1793 in the Romanian monastery of Neamt, where he had become starets in 1779.