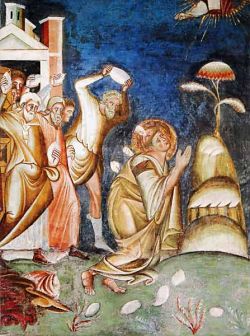 With great wisdom, the Church assigned Stephen's feast to the day after Christmas, a choice that underlines the close relationship between Incarnation and martyrdom.
As the liturgy commemorates Stephen's shedding of his blood, it celebrates the Christian paradox of the Son of God who was born and died to give life to the world. Christians are thus guided in discerning the baby lying in a manger as both the cornerstone and the stumbling block spoken of in the Bible. They are also reminded that those who wish to love and follow Christ choose freely to give their entire selves, even when this means giving up their lives.
Stephen was a member of the first Christian community in Jerusalem. He was one of the Hellenists, the group of Greek-speaking Jews from the diaspora who were the first to leave the Holy City and spread the Gospel elsewhere.
Like many of his companions, Stephen was accused of having a subversive attitude towards the Torah and the Temple. As he answered his accusers, he allowed the Holy Spirit to speak in him. His penetrating interpretation of the Hebrew Scriptures in front of the Sanhedrin was authenticated by his willingness to die in witness to his affirmation that Jesus had risen from the dead, and is the Son of Man seated at God's right hand.
The power of the Spirit made Stephen resemble his Lord, and he died invoking God's forgiveness for his assassinators. With this prayer, he showed that a true martyr is not a martyr "against" someone else, but gives his life so that all people might welcome the message of life contained in the Gospel.
Stephen's testimony almost certainly influenced the conversion of Saul, who was present at Stephen's stoning. With Stephen, the blood of martyrs began to be the seed of Christianity.

He no longer shields his delicate face
with his elbow.
He lies in blood
prays and weeps softly.

Lord God,
in the suffering we encounter in our lives
allow us to turn our gaze to you
so that, filled with the Holy Spirit,
we may love and bless our enemies
as did Stephen,
who implored forgiveness for his persecutors.
Through Christ our only Lord.

MARONITES:
Congratulations to the virgin Mary

WEST SYRIAN ORTHODOX:
Glorification of the Mother of God

EAST SYRIAN ORTHODOX:
Glorification of the Mother of God