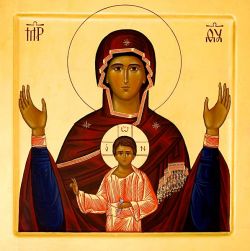 Circumcision and Naming of Jesus; Mary the Mother of God

In the early Roman liturgy, the commemoration of Mary's birth and divine motherhood were celebrated on this day, as witnessed by the solemn statio of "Santa Maria ad martyres" on January first.
In the Byzantine East, on the other hand, the Sinaxis of the Holy Mother of God has long been celebrated on the day after Christmas, December 26.
Under Gallican influence, and following Pope Sergius' introduction of several Marian feasts of Eastern origin into the Western liturgy in the seventh century, the commemoration of Mary on January 1 was replaced by the feast of the Lord's Circumcision. This feast helps to ground the celebration of the mystery of the Incarnation in history by symbolically separating the critical moments in the Word's design of salvation.
In the Middle Ages, under the influence of the Venerable Bede, Bernard of Clairvaux and Francis of Assisi, popular devotion for the Name of Jesus spread in the West. This led in 1721 to the creation of a feast of obligation, which was to be celebrated by the entire Church on the Sunday that fell between January 1 and the Epiphany.
Today, the fact that these different influences have been gathered together into a single solemnity allows the Western church to express the essential meaning of the Incarnation during the Christmas Octave: the loving self-abasement of the Word, who freely took upon himself the fullness of our human condition, was born of the Virgin Mary, and submitted to the Law through circumcision.
As the Church contemplates the Son's self-abasement, it also glorifies the Name of Jesus, which was given to him on the day of his circumcision and means "the Lord saves." Thus expressing the sensus plenior of the Incarnation, the Church looks forward to the coming celebration of the Lord's Epiphany, his revelation to the people of Israel, to the Church and to the entire world.

Father of light,
your Son was born of the Virgin Mary
and lived among us,
submitting himself to your Law
and receiving from you the holy Name of Jesus:
grant that we may find our peace in him
and confess him as your blessing upon all of humanity.

ANGLICANS:
Naming and Circumcision of Jesus

MARONITES:
Circumcision of Jesus
Basil and Gregory of Nazianzus (d. 389/390)

WEST SYRIAN ORTHODOX:
Circumcision of Jesus
Basil of Caesarea and Gregory of Nyssa (d. 395), fathers of the church