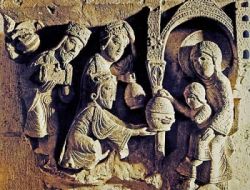 Adoration of the Magi

Epiphany of the Lord

Epiphany is the Greek word for manifestation. Today's solemnity, which is called by this name or the almost identical name Theophany in both the East and the West, has origins that are probably more ancient than those of Christmas.
In pagan Egypt, the birth of the sun god Aion was celebrated on January 6. During the gnostic era, this festival was reinterpreted as a memorial of Jesus' possession by the Logos during his baptism in the Jordan.
The solemnity of the Epiphany was first celebrated in the Church of Egypt, probably in order to give the feast celebrated on January 6 an orthodox interpretation. On this day Christians of every liturgical tradition have always commemorated the manifestation of the Word of God to humanity in three different events, or theophanies. At his birth, the Messiah is revealed to the nations, represented by the Magi; at his baptism, he reveals himself to the people of Israel; and through the miracle at Cana, Jesus reveals his divinity to his disciples, who represent the Church.
The feast of the Epiphany soon began to be observed in all of the churches, and it is universally and unanimously attested as early as the beginning of the fifth century.
When Christmas, a feast that originated in the West, began to spread to the East, Eastern churches responded by accentuating the themes of baptism and the wedding at Cana in their liturgies on January 6. In the West, under the influence of the Roman liturgy in particular, the theme of the adoration of the Magi was emphasized on January 6, and the commemoration of Jesus' baptism was postponed to the Sunday following the Epiphany.
After contemplating on Christmas the 'descending' moment of the Incarnation, the entire Church remembers on Epiphany that salvation is destined to reach all people, as was revealed by Jesus the Messiah, light of revelation to the nations and glory for God's people Israel.

Lord, God of light,
on this day you led the nations by a star
and revealed to them your only Son.
Grant that we who already know you in faith
may be led to the vision of your glory.
Through Christ our only Lord.

ANGLICANS:
Epiphany of the Lord

WESTERN CATHOLICS:
Epiphany of the Lord

LUTHERANS:
Feast of the Epiphany
Walther Paucker (d. 1919), witness to the point of bloodshed in Estonia

MARONITES:
Epiphany of the Lord