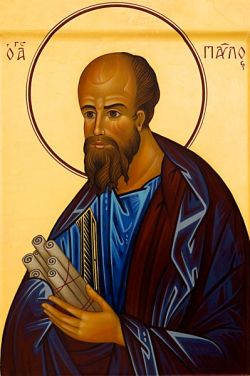 The Revelation of Jesus to Paul the Apostle

Today the Western churches commemorate the revelation of Jesus to Saul of Tarsus, an event of capital importance in the history of the Church.
Saul, a Jew of Cilicia, was educated at the school of the rabbi Gamaliel. About six years after Jesus' death and resurrection, as Saul was travelling to Damascus to bring followers of the "Way" of Christ back to Jerusalem in chains, he felt the living and risen Lord take possession of him, and his life changed radically.
After this utterly personal experience, Saul was referred to the local church of Damascus so that he might receive the fullness of the Spirit and attain a mature vision of faith. He gradually came to understand the meaning of the unique revelation Christ had granted him by grace. Saul, who had now become "the apostle Paul," realized that the Lord was calling him to announce to the nations what he himself would call "the word of the Cross" (1 Cor. 1.18).
For Paul, the Cross is the mystery through which the wisdom announced in Israel's Scriptures, and now unveiled according to God's will, is revealed to all people. It is a mystery of cosmic reconciliation achieved through the Messiah's self-abasement and scandalous death, which Christ accepted in his love for men and women while they were still enemies of God.
Overwhelmed by the mercy of Christ crucified for love, Paul realized from the moment of his conversion that his one mission was to announce the Gospel to all of the earth's peoples.
Today's feast, which originated in Gaul in the sixth century, was extended to the entire West beginning in the eleventh century.

God of truth,
through the preaching of Paul the Apostle
you made the light of the Gospel shine among the nations:
we give you thanks for his conversion,
and we ask you to grant us life through our faith in Christ
according to the Apostle's testimony.
Through Christ our only Lord.

Gregory was born in Arianzus, Cappadocia, around the year 330. His father, a convert to Christianity, was the bishop of the nearby diocese of Nazianzus.

After studying in several of the era's important cities, Gregory was baptized in Constantinople and went to join his friend Basil in Annesi, hoping to share Basil's search for God in solitude. In 361, however, Gregory was forced to abandon the tranquillity of monastic life to help his father manage the diocese of Nazianzus.
When Basil became bishop, he chose Gregory to head the new diocese of Sasima. Gregory was not pleased to be named bishop, and never took possession of the diocese. He stayed with his father, and after his father's death he went back to the monastery. But his life took another unexpected turn in 379, when he was elected bishop of the small Orthodox community in Constantinople, a city ruled by the Arians. Gregory moved to the capital, opened the church of the Anastasis, and delivered sermons of such extraordinary theological and literary value that he received the title of "theologian," which is granted to a very small number of people in the Byzantine Church.
When the Council of Constantinople was convened, Gregory agreed to direct the proceedings. His past refusal to govern the diocese of Sasima soon came to light, however, and Gregory left the city and returned to Nazianzus, where he concluded his arduous earthly pilgrimage in solitude.
He died in 389 or 390, with his heart broken and humiliated but with his gaze absorbed in contemplation of the Trinity, having become a fighter almost against his will.

Lord God,
you gave your Church Gregory of Nazianzus,
who wonderfully sang your praises:
renew this grace in the Church today
so that Christians may give witness to you
with courage and wisdom.
Through Christ our only Lord.

In fourteenth-century Franconia and Alsace, persecution broke out when the Armleder, bands of peasants and vagabonds who covered themselves with pieces of leather instead of knights' armor, planned an attack against the local Jewish communities. On January 25, 1338 the Armleder, armed with saws, shovels and clubs, marched behind a banner and cross into the Alsacian city of Rufach, led the entire Jewish population out of the city, and conducted a mass slaughter. The site of the massacre is still known today as Judenmatt, "field of the Jews."

I am by no means alone
amidst the crowd of my people.
Every newborn gives me joy;
I weep over every death...
each time a well is dug, I rejoice.

To dreams that have evaporated, I sing
a funeral oration,
and every crumb of earth
of each parcel of land
is measured cubit by cubit.