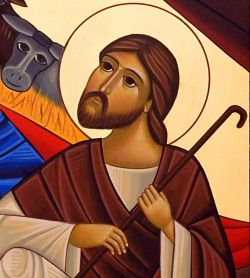 Joseph, Jesus' father according to the law witness

Joseph was a descendent of David, and the Gospel of Matthew defines him with just a few words, calling him "the husband of Mary, of whom Jesus was born, who is called the Messiah" (Mt. 1.16), and "a righteous man" (Mt. 1.19).
He had the task of giving Jesus a Davidic ancestry, of recapitulating in himself the figures of the patriarchs, who often received God's revelations in dreams, and of leading the infant Jesus on the route of the exodus. By making Jesus a full participant in Israel's history, Joseph made him the heir of God's promises.
A quiet man, Joseph discovered God's will day after day in his prayerful silence. After his return from Egypt with Jesus and Mary, we are told nothing more about him. According to an ancient legend, he died in profound peace, pointing to his son Jesus, whom he recognized as the Messiah, as the reason for his serenity as the end of his life on earth drew near. In the Western tradition, this legend soon inspired Christians to invoke Joseph's intercession in the hope of receiving the gift of a peaceful death.
The Byzantine churches commemorate Joseph together with David and James, the Lord's brother, in the days following Christmas. In the Coptic Church, Joseph's feast was being celebrated as early as the fifth century. In the West, on the other hand, an actual feast dedicated to Joseph began to be celebrated only in the modern era, and became a feast of obligation in 1621.
In recent times, despite Pope John XXIII's request that Joseph's name be added to the Roman Canon, his feast has lost the solemn character it had acquired in the seventeenth century - a loss that perhaps underlines the discretion and silence that have always accompanied the commemoration of the man who was Jesus' father according to the Law.

Joseph of the closed lips is the man of inwardness; he belongs to that band of silent people for whom talking is a waste of time, and above all a betrayal of the Untranslatable, the Ineffable. Joseph of the closed lips is the man who begins where Job ends, who is born with his hand over his mouth. He has an enormous sense of God, of the vastness of his Being and the folly of his love.
After the return from Egypt, Joseph vanishes. Believe me, there is no sadness in this death, the blessed Joseph's transitus. His silence is the same as God's silence. It is filled with the force of Love.

from Louis-Albert Lassus, Praying is a Celebration

Lord our God,
it was your will that your Son Jesus
be called the son of Joseph,
to fulfill the promise made to David:
allow us to welcome the mystery of the Incarnation with simplicity,
as the humble and righteous carpenter of Nazareth welcomed it.
Through Christ our Lord.

OLD CATHOLICS:
Joseph, Jesus' father according to the law