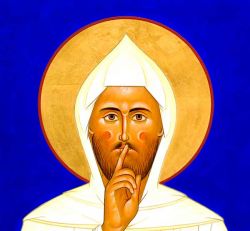 Today is the feast of Benedict, the father of Western monasticism.
"There was a man of venerable life, Benedictus (blessed) by grace and by name." So begins the second book of Dialogues, in which Gregory the Great tells the life story of the most famous Latin monk, who was born in Nursia, Italy around the year 480.
Benedict was sent to study in Rome, but he left the city, "wisely ignorant and sensibly uncultured, desiring to please God alone." He explored the different forms of monastic life that existed at the time, experienced semi-anchorite life in Affile and eremitic life in a cave near Subiaco, and noted the decadence and lack of discipline that characterized cenobitic life in his era.
After a failed attempt to reform an already existing monastery, Benedict returned to solitude. He was soon joined by many people who wished to have him as their spiritual father. Benedict organized a number of small communities for his disciples, assigned an abbot to each community, and taught the monks to become familiar with Scripture and to lead lives of fellowship and prayer.
In 529 Benedict moved to Montecassino with several monks to found a new type of monastery. For this cenobitic community guided by a single abbot, he wrote his Rule, which bears witness to his expert discernment and sense of moderation, and which eventually became the essential guideline for all of Western monasticism. Benedict organized the community's daily schedule so as to allow time for both prayer and work, which he considered equally necessary to monastic life.
According to an ancient tradition, the father of Latin monks died on March 21, 547.

Lord God,
you called Benedict to follow your Son Jesus
by abandoning all of his possessions
and living in celibacy and community:
teach us to serve you in work and prayer
and to prefer nothing to the love of Christ,
and we will run with open and free hearts
along the path of your commandments.
Through Christ our Lord.

On this day in 1556 Thomas Cranmer, Archbishop of Canterbury, was burned at the stake by order of Mary, Queen of England. He was one of the many victims of the Catholic revenge led by Henry VIII's daughter during her brief reign. With him the English Reformation lost its most broadly influential figure.
Thomas was born in Aslockton in 1489, studied at Cambridge, and seemed to be headed towards a tranquil academic career when a chance meeting with Henry VIII changed the course of his life. Cranmer had already been investigating the ideas of the Protestant Reformation for some time with a group of friends. He now applied his intellect to the task of giving the new Church of England theological, and above all liturgical, foundations. Under his direction, an English-language translation of the Bible was completed, the Book of Common Prayer was written, and a first version of the Anglican confession of faith was drafted.
Elected Archbishop of Canterbury in 1533 by the king's decree, Thomas treated the enemies of the Anglican Reformation with a certain degree of humanity, but he never distanced himself publicly from the less evangelical positions of the royal family.
Because of his involvement in a plan to designate an Anglican successor for King Henry, Cranmer was harshly persecuted for three years after Henry's Catholic daughter Mary took the throne in 1553. Humiliated and forced to recant his positions, Cranmer was finally condemned to death. He regained his strength and dignity at the end of his trial, reaffirmed all that his conscience had dictated to him over the course of his life, and asked his supporters to forgive him for the false recantations he had signed.
The Church of England commemorates him as a martyr.